Jam on the Vine by @LaShondaKatrice: An African American Girl Who Grew Up To Be " The Voice of A Community"

I'm pretty sure that Jam on the Vine by LaShonda Katrice Barnett was on the Goodreads page for Balm which I reviewed on this blog here.  It was a book that was added by people who liked Balm.  Since I was looking for another high quality African American historical novel, I prioritized the book on my library TBR.  The protagonist is Ivoe Williams who wanted to be a journalist from an early age.  I've never read a historical novel dealing with African American newspapers.  So I thought I'd learn a great deal about their history and the historical context by reading this book. 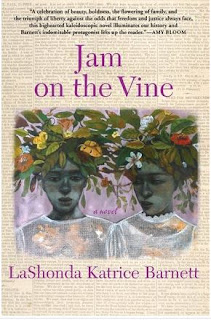 The book starts in late 19th century Texas.  I am well aware that the issues which the current Black Lives Matter campaign focus on have a long history.  In the minds of some individuals, slavery was never abolished.  Black people owning anything, or having any degree of independence angers these people.  They don't want to accept that African Americans are human beings with the same rights as other Americans.

Ivoe  was born to parents who had been free all their lives.  Her  mother was an Islamic woman who owned land and had a small business.  She sold jam made from the tomatoes that she grew in her garden.  Everyone called her Lemon, but her birth name was Leila. Lemon's parents came from a Muslim enclave in 19th century Alabama.  To learn more about the history of African Muslims in the United States read Servants of Allah: African Muslims Enslaved in the Americas by Sylviane A. Diouf . Ivoe's father Ennis was a metalsmith.  Both were well regarded within Little Tunis, an African American neighborhood.

Yet this community was an island surrounded by a sea of hatred. As a child, Ivoe first became aware of this when her school was burned down because a little black boy was seen reading to an elderly white woman. A generation earlier it was a crime to teach blacks to read.  Ivoe's writing ambitions were anathema in this context.

Since my last review for Book Babe dealt with a novel whose protagonist was a journalist, I noticed that like Rebekah Roberts in Invisible City, Ivoe's first attempt at an article didn't credit its sources.  It's important to point out that Rebekah had the opportunity to study journalism, so she really should have known better.  Ivoe never had that opportunity.  She did learn how to write better stories from Ona Darden, a woman who became very important in Ivoe's life.  Ona told her, "You are the voice of a community."  So Ivoe's journalistic career wasn't just about achieving her own dreams. She was representing African Americans.  Ivoe's sense of what it meant to speak on behalf of her people evolved over time as she matured.

African American newspapers also reported on atrocities.The mass murders of African Americans and burnings of their neighborhoods in the early 20th century which are mentioned in Jam on the Vine remind me very much of anti-Jewish pogroms in Eastern Europe during this period. A great wave of  Jewish immigration appeared on the shores of England and America. At the same time,  a vast influx of African Americans arrived in the cities of the North. This was called the Great Migration which is often framed as a quest for factory jobs.  I realized with Ivoe that although such jobs may have been a consequence of this exodus for some, blacks were really fleeing for their lives.

I was very impressed with the coverage of issues dealt with in Jam of the Vine and their relevance to  Black Lives Matter.  I also loved the way the major characters and their relationships were portrayed.  Lesbian love was shown to be the equal of heterosexual love.  This is certainly one of the best novels that I have read in 2015.