Sword of the Gladiatrix: Women Duke it Out in the Roman Arena

An action-packed tale that exposes the brutal underside of Imperial Rome, Sword of the Gladiatrix brings to life unforgettable characters and exotic settings. From the far edges of the Empire, two women come to battle on the hot sands of the arena in Nero's Rome: Afra, scout and beast master to the Queen of Kush; and Cinnia, warrior-bard and companion to Queen Boudica of the British Iceni. Enslaved, forced to fight for their lives and the Romans' pleasure; they seek to replace lost friendship, love, and family in each other's arms. But the Roman arena offers only two futures: the Gate of Life for the victors or the Gate of Death for the losers.

“I am blown away and enthralled with the work of this author.”—BookPleasures.com

Having read and enjoyed Russell Whitfield's Gladiatrix, I was pretty excited to give this a go. You can't have too much of a good thing, and women fighting each other in Roman times makes a very exciting story. Throw a conflict such as two women who love each other being forced to fight each other and it's doubly interesting.

But at the same time having read a similar twist before, it made this book a tad predictable. On top of that, the heroines do not actually becomes gladiatrixes until about 65%, so calling this Sword of the Gladiatrix seems a little like false advertising.

That being said, I did enjoy the story. For some reason I connected with Afra way more than I did Cinnia. Cinnia's parts began with her fighting for Boudica. I should have loved this, but her parts fell flat for me and I didn't care for her flashbacks or dreams. Afra's scenes took place in Africa and began when she worked for her Kandake. Circumstances with her stepsister lead to her being enslaved and taken to Rome where she works wonders on a pair of hunting cats. I really liked her character. Cinnia rubbed me wrong a few times and she also ruined the romance for me by getting it on with another chick in the story. What kind of love is that?

Having read about Rome, the fights, and weapons before, I can tell the author did meticulous research into this story and her writing was well done. 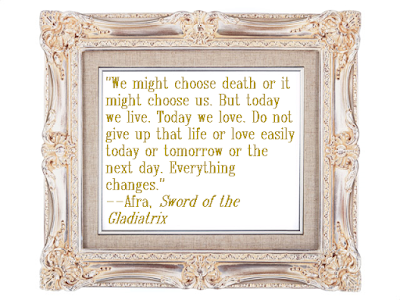 Sword of the Gladiatrix Available At

FAITH L. JUSTICE writes award-winning novels, short stories, and articles in Brooklyn, New York. Her work has appeared in Salon.com, Writer’s Digest, The Copperfield Review, the Circles in the Hair anthology, and many more. She is a frequent contributor to Strange Horizons, Associate Editor for Space and Time Magazine, and co-founded a writer’s workshop many more years ago than she likes to admit. For fun, she digs in the dirt—her garden and various archaeological sites.


Sword of the Gladiatrix Blog Tour

Tuesday, June 30
Guest Post at I Heart Reading
Spotlight at What Is That Book About

Tuesday, July 7
Interview & Giveaway at Passages to the Past