Until I read The Castlemaine Murders  I had no reason to think about the Australian TV series Miss Fisher's Murder Mysteries and how it might be different from the books.  I actually didn't know very much about the issue because I hadn't seen very many episodes of the TV series.  A few of them appeared on American public television, and it looked like it was a typical situation of adaptations needing to leave out sub-plots or other details due to the constraints of episodic television.  I understand that.  I try not to let it bother me unless what the TV series leaves out feels very important.

I have a friend on Goodreads whose first exposure to Phryne Fisher was the TV series. She is now reading the books in order,  and made a remark that she preferred the TV version because of the lovely relationship between Phryne and Detective Inspector Jack Robinson.  I was taken aback by this news because I knew that Jack Robinson was a happily married man in the book version, and that he was much too conventional for Phryne in any case.    Yet I still didn't think about how much such a change would matter to me.

I've been reading the Phryne Fisher books in no particular order based on whatever book happened to catch my interest.   Enter The Castlemaine Murders stage right.  I started reading it and saw that Phryne's lover, Lin Chung, was very prominent.

Then I wondered what they had done with this book on the TV series.  I looked at a list of episodes on IMDB and saw that it wasn't there. When I understood that the TV series had engaged in a deliberate de-emphasis of Lin Chung in order to make room for a potential relationship with Jack Robinson, I felt a rant coming on.  There really are some serious implications in this change, and for me The Castlemaine Murders represents why it's important. 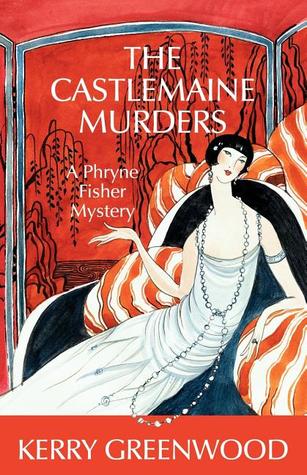 Phryne Fisher is controversial because she isn't monogamous, and is often considered promiscuous.  Yet she does have a primary relationship in Kerry Greenwood's books.  He is the man to whom she always returns because he's special, and that special individual is Lin Chung.  He is portrayed as not only attractive, but also competent, intelligent, resourceful,compassionate, courageous, loyal, generous and considerate.  He also has remarkably good taste.  He is rooted in his culture. He feels committed to his family and community.  Unlike many Asian characters in fiction who make their home in the West, identity isn't a troublesome question for him.  He knows who he is, and where he belongs.  He isn't lost and has no feelings of angst.   Yes, he's idealized.  Yet it does mean something that for Phryne Fisher the perfect man doesn't have the same background as she does.  Kerry Greenwood celebrates diversity through the relationship between Phryne Fisher and Lin Chung.

In The Castlemaine Murders Lin Chung comes into his own.  He has carried out important missions for his family before, but in this book he's shown as establishing diplomatic links with other Chinese families and taking a philanthropic role in giving assistance to elderly impoverished Chinese.

The significance of this novel goes beyond Lin Chung's metamorphosis into a family and community leader.  It also deals with race hatred directed at the Chinese in the Australian Gold Rush during the 19th century.  There is mention of an extraordinary individual, a white Australian constable named Thomas Cooke who risked his life to stop an anti-Chinese riot.  There is a commemorative plaque devoted to Thomas Cooke which can be found at the Monument Australia website. This history needs to be remembered.  Racism is a worldwide problem, but it's possible to make a stand against it.  It is the presence of Lin Chung in the book series that allowed Kerry Greenwood to address this theme.

My feeling is that the choice to make Lin Chung a minor background character in the TV series reflects a discomfort with the interracial relationship and with the potential of this character to raise issues that are equally disquieting.  Replacing him in Phryne's life with Detective Inspector Jack Robinson makes the TV series more like a conventional crime series.  It probably broadens the appeal of the TV series, but I consider it a disservice to a character that I love.

The Castlemaine Murders could have made a powerful episode in Miss Fisher's Murder Mysteries.  Fortunately, the novel still exists to show us that a Phryne with Lin Chung is far more interesting than a Phryne without him.