Six and a Half Deadly Sins by Colin Cotterill

Six and a Half Deadly Sins is the most recent book in a mystery series that takes place in Laos in the 1970's.  If historical fiction is defined as fiction taking place at least fifty years ago, then this series doesn't meet that criterion.  The central character, Dr. Siri Paboun, is one of the more memorable mystery protagonists.  I've loved him ever since he debuted in The Coroner's Lunch which is still my favorite book in the series.   At the beginning of the series he was drafted to become the coroner of Laos.  There was no one else who was qualified.  At this point, he's retired from the position.  Yet Dr. Siri continues to involve himself in murder cases along with his remarkable wife, Madame Daeng. 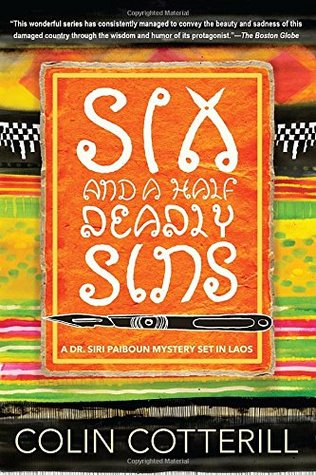 The title of this book is a pun.   In Lao a traditional handwoven skirt is known as a pha sin.  Dr. Siri received a sin with a grisly surprise sewn into it.  This sent him, his friend Civilai and  Madame Daeng to the North of Laos where the sin had been made to investigate further.  He traveled from place to place being given sins with more clues.   Clues to what?  The case is very slow to develop.  We don't learn exactly what Siri is investigating until close to the end of the novel.  A group of very courageous woman weavers had no other way of exposing a killer who terrified everyone in the region.

Unfortunately, the slowness of plot development is a serious problem.   Most of this book had little going for it beyond witty dialogue.  Southeast Asia was in tremendous upheaval during the course of this novel, and we are told about these events.  Yet very little actually happens in the narrative until we finally find out what's really going on in Northern Laos.  Once the plot gets going there is a great deal of suspense and some clever twists, but it's all backloaded toward the end of the book.

By the way, don't cross Madame Daeng.   She's quite an action figure for an old lady.  There's lots of life in the old girl yet.

So I liked the book by the time I finished it, but 75% of this book had far too leisurely a pace.