The title of this book intrigued me.  I knew it was a historical romance.  I have read and reviewed a few of them.  So I accepted a free copy of Hecate's Moon from the author in return for this honest review. 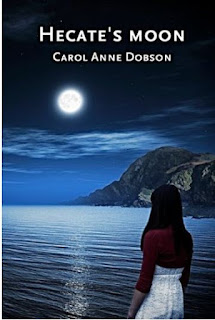 I had really hoped for some lore about Hecate, but there isn't much content about this Goddess in Hecate's Moon.  The herbalist/healer/midwife Esther Cerfbeer struck me as a more authentic Hecate priestess than Mrs. McAlpine who didn't appear to have a clue about her nature. Based on my knowledge of Greek mythology, the sort of rituals that Mrs. McAlpine performed seemed like they should be devoted to Dionysus or Aphrodite Pandemos.

When the hero Armand arrived in the town of Ilfracombe after fleeing revolutionary France to take up residence at his family's Devon estate he found missing girls, witchcraft hysteria, smuggling and shipwrecks.  He also discovered that his house had been named after his estate manager, and mysteriously never even objected to that.  I intellectually understood why he was obsessed with returning to France to fight in the royalist cause, but I didn't think it made him sympathetic.    It wasn't just that it was a lost cause, it wasn't a particularly worthy one.  The House of Bourbon hadn't shown itself to be good rulers.   Of course the revolutionaries weren't any better.  Someone with better judgment would want to stay well away from France and its volatile political situation, but Armand never thought anything through.

I thought that Esther was the most interesting and best developed character in the book.  There were numerous things that bothered me about  Armand, but what absolutely drove me crazy about him was that he was too trusting.  So I had to categorize him as TSTL (Too Stupid To Live).  He and the heroine, Isabella, both took too long to figure out what was really going on in Ilfracombe.    Esther didn't figure it out at all, but she was old and not in good health. What was Armand and Isabella's excuse?

There is a requisite HEA for the romance, but I didn't like Armand.  I kept on wishing that Isabella had a more sensible alternative.