A Pirate's Heart by Catherine Friend 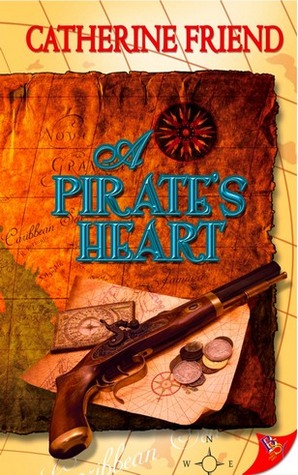 ...she stopped before a group of ogling men and gazed at each one, letting her eyes rest overlong at each crotch, after which she smiled sadly. She found this worked well to disarm lewd sailors.

This story is so much fun! It has a butt-whooping woman pirate, romance that has plenty of time to blossom--nothing rushed here, bits of humor in the dialogue and narrative, a modern-day hunt for a map and its treasure, thugs, and even a very lovable poodle. Poodle-doodle-noodle! LOL And the narrative is so refreshing, so honest and real. By narrative I mean the modern-day heroine's. This is one of those double-time period stories.

Obviously, the historical tale follows a lady pirate, a woman men fear at the very sight of her billowing black hair, a woman who after she takes a ship's loot, she chooses a man to bed her and then discards him because bedding men on board her own ship causes problems. She's also a woman who is tired of killing but knows no other way to make a living and she's the kind of woman who will free chained-up slaves or rescue them from the sea and kill a man for raping another woman. Did I mention she's also chasing down some Spanish treasure? And so is another pirate...who's none too fond of her. If the turbulent sea doesn't claim her...well, 'nuff said.

Unlike most stories that try to add suspense and bad guys to the tale, this story didn't come across as ridiculous...well...not until the end, anyway. It lost a point in my eyes with this the whole island-that-only-people-in-love-can-see thing.

I was kept in marvelous suspense too, all the time wondering what really happened to Tommy. Even the contemporary story line surprised me. The historical parts were my favorite, but as I said above, the contemporary narrator, her voice and wit, kept me intrigued in the modern tale too.

So why three bikes? What didn't I like? As you can see I really enjoyed this tale for the most part, but I must confess I hated the ending. I hated Randi. I didn't quite take to her. I think part of this is because the modern parts were in first-person POV--Emma's--and while Randi was aloof and distant with her, the POV style chosen to write the modern scenes meant that Randi was also aloof and distant with me, the reader, as well. But honestly, Randi is an asshole regardless and while I thought one crime could be forgiven, permitting someone to believe their dog is dead...for an entire day...hell no. HELL NO. Unforgivable. It was at this point the story could not redeem itself. Didn't matter that it was only a chapter or two left, it was ruined for me. Randi went too far and had done too many assholey things. I didn't want Emma with her and that doesn't make a very good romance, does it?

I acquired this on Paperback Swap.