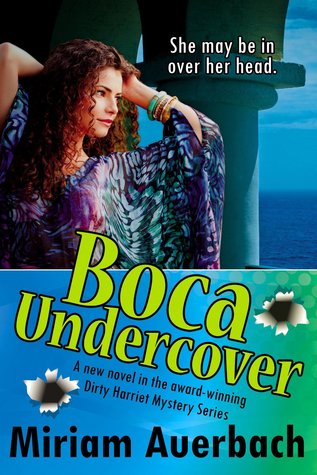 ...people keep coming to me with killings. I guess it's like being a doctor. You might be a pediatric podiatrist, but that doesn't stop people from asking your advice on their pathological prostates.

Harriet is a P.I. Her thing is scams. But people keep bringing her murders...and that's no exception in book four of this Dirty Harriet series. Her former flighty Boca babe friend is in rehab to get clean from a coke addiction. While in there, she's certain that teenagers are being murdered daily... At first Harriet thinks her friend has lost her marbles, but a visit to the clinic has her checking in herself (and her inner vigilante).

And don't think for a second that Harriet's being checked into a clinic means she doesn't manage to get a little help from her friends and our favorite characters: Enrique, her new stepdad, the Countess...

And who knew Lana the alligator had a great nephew?

I felt like this one was a little shorter than the other books, but that could just be me. I get so engrossed in these funny, witty stories with this tough, kick-butt heroine, I really never want the books to end. The humor, though tamer this time around, was still rampant--more in sarcasm and observations from Harriet than actual happenings. The book has mystery, anticipation (she really sorta needs to get this thing solved in 24 hours so she can see her sexy karate (Crav Magna?) instructor, humor, and this time around we also get to see a more vulnerable side to Harriet as her situation brings back things from her past.

I figured out the mystery before Harriet did, but I must give the author points for a totally new idea. I can honestly say I've never read a situation like this one. It's def unique and intriguing. I think my only complaint about this story is...the setting. Harriet is usually out riding her hog and getting into all kinds of trouble. But in this tale, she's confined to the rehab clinic. This bothered me for some reason. But it was certainly bothering Harriet too, so maybe we're intended to feel that way along with her!

Fans of the Dirty Harriet series won't want to miss this one. New readers to the series should read book one first.

I received this digital ARC via Netgalley.