I'm always up for a circus novel.  That's why I downloaded Last Stop Klindenspiel from Amazon.  The last circus fiction I reviewed here on Book Babe was the YA paranormal romantic circus novel Girl on a Wire.  You can find that review here .  Last Stop Klindenspiel by Marta Tandori is very different in tone.  It's supposed to be a historical prequel to what looks to me like a contemporary Los Angeles noir  mystery series.  I haven't read the series, but the Kindle edition of Last Stop Klindenspiel contains several excerpts from the Kate Stanton series.  In the series timeline it is  established that Kate Stanton was once Katya Holberg.  I don't know how fans of the Kate Stanton series react to the revelations in this novel, but I found that the prequel stands very much on its own. 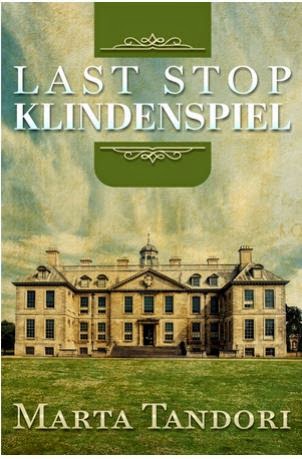 My identification with Katya made this a tough read because she experienced so many traumatic events during and after World War II.  I had to take frequent breaks from the book in order to cope with its raw intensity.

Many readers will not have heard of the Nazi Project Lebensborn.   This was as effort to increase the number of  so called "pure Aryan" children.   The term Aryan originally referred to a linguistic group, not a race. Katya was brought into the world as part of the Lebensborn Project.  Her father, a self-absorbed Nazi officer, had a sexual relationship with Sonia Holberg, a Norwegian woman who became Katya's mother.  After World War II the women who participated in Lebensborn suffered in the backlash against anyone associated with the Nazis, and so did their children.  Before reading Tandori's novel,  I was aware of the Lebensborn children, but had no real awareness of their post-war persecution.   This is an aspect of the post-war environment that should be more widely known.

The circus Klindenspiel was supposed to be a haven for Katya.  She would be able to exhibit the skills as a contortionist that she had learned from her mother.  Yet the young performers at Klindenspiel  were submerged in a miasma of fear and antagonism toward their superiors and each other.  Katya wanted to understand why there was so much negativity.   She idealistically wanted to improve the lives of everyone at Klindenspiel, and she received unexpected support from some very unlikely sources.

If you are looking for circus lore or vocabulary, you won't find that sort of thing in Last Stop Klindenspiel , but you will find some very realistic descriptions of training and choreography for acrobatic routines.  The vocabulary seems to originate from the world of gymnastics, and I have some familiarity with it.

What I appreciated about this book was the history, the character relationships, the suspense, the surprising plot twists  and the imaginative concept.  Marta Tandori did everything right in this book.

I'm still mystified about how Katya Holberg eventually became Kate Stanton, but I was completely satisfied by the resolution of this particular chapter in her life.