What Today’s Young Women Can Learn from Annie Oakley: A Guest Post from Jeffrey Marshall

Please welcome the author of Little Miss Sure Shot: Annie Oakley’s World as he shares with us today what we can all learn from the famed sharpshooter.

1.       Your background may be a hurdle, but it’s not a barrier. Annie grew up dirt-poor in a log cabin, to a Quaker family who had migrated west to western Ohio. Her father died when she was very young, and her mother remarried twice more. They were subsistence farmers, like so many others around them, and Annie competed for attention with six other siblings.

Annie took it upon herself to learn how to shoot, to bring game home for the family table; before long, she was selling what she shot – birds, squirrels, rabbits – to a local purveyor of meats. From there, she continued honing her skill and broke into competitive shooting.

If Annie had been born into a well-to-do family, it’s unlikely she would have taken up shooting, and especially the world of competitive target shooting, which was almost entirely ruled by men.

2.       Persistence and practice are vital in any profession. It’s unclear exactly how Annie developed the jaw-dropping skill she had with firearms (some of it certainly involved extraordinary hand-eye coordination), but she must have spent many hours honing that talent when she was quite young. Even when she was shooting professionally before large crowds with Buffalo Bill’s Wild West Show, she was practicing and adding new elements to her act. The famous trick in which she shot a target while looking at a mirror and sighting behind her was something she and her husband, Frank Butler, added to her act only after she had done it often enough to be sure of her accuracy. The same was true of such tricks as shooting from the back of a pony or twirling a rope while she shot.

3.       Find a specialty that satisfies you and appeals to others. Obviously, Annie’s specialty was target shooting, but she did it so spectacularly that she became a star. In that era, the women who rose to fame were often performers, like Annie – the singer Jenny Lind and actresses Lillian Russell and Sarah Bernhardt chief among them. And Annie was quite a performer, by all accounts: despite a general shyness, she included crowd-pleasing elements like blowing kisses to the crowd, curtseying, and stomping her foot if she missed a shot. It’s unlikely that anyone could ever emulate what Annie did, but she showed that finding a niche and cultivating it could lead to tremendous success.

4.       Work on developing traits like courage, modesty and integrity. Annie’s ascent into the shooting sports firmament took a good deal of courage, especially when she was in her teens and competing in local events where the other contestants were all men and the crowds were betting against her. Later, when she was touring and came out as a performer each day, she had to block out everything, overcome any butterflies (it’s likely she had some when she first shot before royalty) and – like a stage actress, which she briefly was – give it her best.

By all accounts, Annie was modest about what she did – but not too much so. She thought she deserved top billing, and when it happened, she didn’t lord it over the other performers. Yet when a series of newspaper articles mistakenly attached her name to a theft, she launched a series of libel actions – the most extensive in American history to that date. Her name and reputation were extremely important to her and she refused to have them sullied.
Annie also showed a number of instances of real physical courage. She was injured in accidents in 1901 and 1922, both of which required extensive rehabilitation, but she refused to let them keep her from her livelihood.

5.       Give back to others. When she had the opportunity, and especially after she retired from active touring, Annie set up classes to teach people – especially women – how to shoot. She didn’t spark a huge surge of interest in the sport, but she stayed with the instruction because she truly felt it conferred important qualities like independence and self-reliance – and to her, it was fun. Even in her late 50s, she was teaching shooting in Pinehurst, NC.

Annie also was always conscious of the station she had earned, and tried to help others who also had been disadvantaged. In her later years, she gave generously to orphanages and charities for the needy, and reportedly paid for the schooling of as many as 20 young women who would otherwise been unable to afford an education. 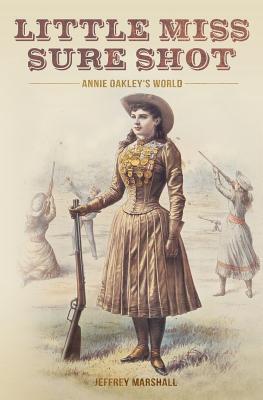 Little Miss Sure Shot is a fictionalized account of the life of Annie Oakley, drawing heavily on the real timelines and events of her life. However, the book is not a biography - it invents situations, people she meets, and a myriad of conversations. Moreover, while the book is presented chronologically, apart from the prologue, it skips certain periods and attempts to focus on those that are especially vital, such as the early years Annie spent with Buffalo Bill's Wild West Show, including the tours through Europe. A special feature of the novel is the framing of Annie's loving marriage to fellow sharpshooter Frank Butler, whom she married at sixteen and remained married to for 50 years until her death. Frank was far more than just her husband - he was her manager (he gave up his own shooting for that role) and her constant companion. The novel closes with an epilogue in Frank's voice, presenting an overview of their lives together and the circumstances of her death in 1926.

Jeffrey Marshall is a writer, poet and retired journalist. Little Miss Sure Shot is his first novel but third book, having published a business book on community reinvestment more than 20 years ago and a volume of collected poetry, River Ice, in 2009. He has an undergraduate degree in history from Princeton and a master’s degree in journalism from Northwestern.