The Firebird's Feather by Marjorie Eccles 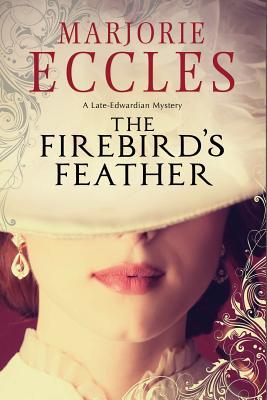 This is a light mystery set in 1911 London. Actually, the word "light" is probably wrong. After all, a woman is shot to death in Hyde Park. That's serious stuff. But the telling of it all, the lack of emotions from the characters gave it a light feel.

Except for a nervous Bridget (the niece) and a flighty sister, the women in the story were like robots: the assistant, the daughter. The men seemed to be fleshed out a little more, namely the beau and the nephew. (The husband didn't seem as affected as I would expect.) I guess that would be my main quibble with the book and I'll just get that out of the way. The characterizations were presented to us in such a way that while we're given lots of details (some of them impertinent to the story) about each character, we never come to care for them at all. At least I didn't.

The story itself, the plot, is really somewhat exciting. A wealthy married woman who writes racy romances in her free time and has a male companion (not her husband) taking her to shows and riding with her in the park is just shot dead one day. There's missing property, Russian connections, and strange secrets about her popping up here and there during the investigation.

At the heart of it all is the possible beau who really wants the woman's daughter, the robotic daughter, a bluestocking niece, a flighty sister, a husband with a missing gun, and a mysterious assistant as well as a nephew who runs a controversial newspaper. The story throws just enough details at you to throw you off and keep you guessing. What does one have to do with the other? Is this even relevant, you wonder as you read and pick up clues.

But it's rather slow and on top of my above quibble, I also grew irritated at the "jumping" around. Example: The scene is on Marcus. He is about to go visit the newspaper. Scene ends. Then it goes to the daughter and Marcus shows up to visit her. I thought he was going to the paper? Then he sits down to tell her about his trip to the paper and we jump to that scene.... I'd prefer it be in chronological order. There was also something off with the historical aspect. It's a historical setting--with horses, dresses, rules and etiquette, and a coronation, but I never felt transported as I tend to do with good historicals.