The Secrets of Midwives by Sally Hepworth 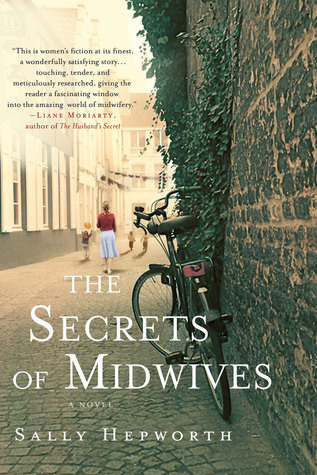 I was expecting more of a historical tale to this. When I hear "midwife" I think of Call the Midwife or of women running from one log house to another in the last 1800s to assist with a birth. There's none of that in this book. It's about modern midwives, about how they are still doing their thing, while facing nursing boards threatening to provoke licenses and arguing with doctors who think they know it all. I found this read very insightful about the lives and careers of modern midwives and what they believe about mother and baby bonding and all that.

Despite it being different from what I expected, I thoroughly enjoyed this story and the women I met within its pages. I zipped through this in two days, dying to know what was going to happen next. There's hospital drama, marital drama, and secrets from the past. There's spousal abuse--a kind I never thought of. There's mother/daughter relationships and above all a strong moral: love is love. Biology has nothing to do with it.

It's very well written too, not overly descriptive or boring or long winded. It is a very good first novel. I'm impressed.

A quick recap for those who need it: Floss was a midwife in the fifties. She has a big secret she's been keeping from her daughter and granddaughter and now partner. It's holding her back from really enjoying her life. Grace is too pushy with her daughter, Neva. This makes Neva steer clear. Grace's drama is about her license, the board. Through her we see some of the hostility between hospital doctors and midwives and the difference in their beliefs. Neva is a modern midwife who toes the line between both worlds by working in a birth center attached to a hospital. She's pregnant and refuses to name the father. Why?

As I said above, very suspenseful, but I confess I had Floss's story figured out around page 100. Yet, Neva, I couldn't quite get it. But this is also where my quibble comes in. While kept in suspense as to who the father of Neva's baby is...it also felt too Jerry Springish as Neva decided first one man then another must be the dad. I mean, just how many men are you bedding in the course of a month, lady? Dang.

That just sort of put me off. I'm all for women taking what they want, when they want, but a nurse should have some more smarts than this. So she doesn't think she's likely to get preggers, I get it, but there are diseases out there. Hello? I'm amazed a woman in the medical profession is that dumb. I really am. To bed miscellaneous men without protection.

My only other quibble is I'd have liked more of the relationship between Floss and Lily. As it was, I had to wonder why Lily was even in the book. There was way too little to make it count.