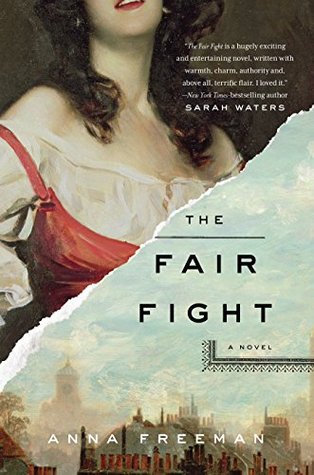 ...they'll say whatever they will to please themselves, and you'll not stop them. But you can stop them from hurting you...

I thought this was going to be about ladies boxing in 18th-century England. While it contains some boxing amongst females, only a very small amount of the story actually focuses on the subject. Most of the story seems to center around a theme of addiction and dependency. Gambling addiction. Alcohol addiction. Dependency on both the mentioned vices and on other people. Laziness--unwillingness to make do for oneself--seems to be another theme as it's common amongst almost all the characters.

Ruth is the toughest one, the one who despite the fact she comes from a house of ill repute, learns to make her fortune using her fists rather than her...well, you know. And I greatly admired her despite the fact she is mostly under Mr. Dryer's thumb until she's left to her own devices without food or water and then becomes a shell of herself. She can't look after herself at all, can't find help, look for work, gather stuff for burning. When not fighting she's useless and dependent. HOWEVER, in the end I was really impressed with her once again. She is by far my favorite character. Just like people in real life, the characters in this novel face set-backs.

Charlotte is raised to be a lady but had the pox and now lives with a man who doesn't care for her at all. She imprisons herself in an alcoholic haze of being miserable and picking at her scars. (What a gross and weird habit). She replaces one addiction (or two if you count the picking at herself) with another: fighting. As a matter of fact, when Ruth and Charlotte began training together--that's the best part of the book, in my opinion. But it isn't till the end. Regardless, Charlotte, too, impresses me in the end. Besides being about addictions and fighting, this is a story of women making the best of their situations in a male-dominated world.

George is a dandy with the gambling addiction, completely dependent on Perry, another dandy (and alcoholic dependent on a fortune left to him and unable to care for himself) and Charlotte's brother, for everything but the air he breathes. This is my number-one issue with the book. What is the point of George? While he nicely fills in the blanks between Charlotte and Ruth's bits, as to what's happening, I feel the book would have been a lot better had it just stuck to Ruth and Charlotte's POVs. I disliked George immensely and felt his POV did not add to the story at all but rather detracted.

I feel like I'm missing something here, some moral, some food for thought. The theme of dependency just keeps striking out at me. Are any of us really "tough" whether we fight with our fists or words? Or are we all dependent in some manner on others? Are we all in some way or form using someone else?

And if I come off as complaining, I'm actually not. Though not what I expected, I found this book very engrossing and it completely transported me to another time and place. I took away new words I'd never read before--I now know what a catch-fart is! I had a few good chuckles despite the darkness of the stories.

Have you a padlock on your arse, that you've to shit through your teeth?

And the lady boxing, when the story finally truly focused on it, was fabulous, gritty fun. And the characters...though at times I was disgusted with them and had a hard time understanding their actions or lack of actions, they were real. I felt I knew them regardless of my personal feelings toward them.