Dreaming Spies: So How Was Your Trip To Japan, Mary Russell?

I love Mary Russell.  This mystery series is Laurie R. King's revision of the Sherlock Holmes mythos that includes a female apprentice who later becomes his wife.  She  co- investigates cases with Sherlock Holmes, she is a capable fighter, excellent at playing a role, knows many languages and studies religion at Oxford.  Some would call her a Mary Sue, but she isn't perfect by any means.  She has a traumatic background that has given her nightmares, and other symptoms of PTSD-- particularly in Locked Rooms.  Yet Mary Russell is a strong survivor.

So I prioritized the ARC of  Dreaming Spies when I was approved for it at Net Galley.  This is the most recent novel in the Mary Russell series which will be released in February 2015. 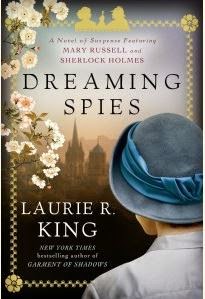 Dreaming Spies is the much anticipated Japan novel.  Mary Russell and Sherlock Holmes travel to 1920's Japan simply because they have never been there.  Since I truly relish novels that delve into Japanese culture, I had high hopes for this book.   One of the characters is a very capable female ninja.  We learn that female ninjas are called kunoichi. There are further revelations about ninjas, and their role in Japanese culture.  It should have been very exciting.

I really did like the Japanese cultural content and the female ninja.   As a lover of fiction that contains martial arts, I enjoyed the inclusion of a kendo scene with wooden practice swords known as shinai. I liked seeing Mary Russell at Oxford at a research library in the final section of the book that took place in England.

Alas, Dreaming Spies doesn't rank with my favorite Mary Russell novels.  I found it relatively low key.   There is a tragic death in this book, but I felt distanced from it.  This is because we have barely been introduced to the victim when his life comes to a sudden end. It was also much less suspenseful than I would expect from a mystery.  In the first 60% of the novel, the main focus of suspense is whether Mary Russell and Sherlock Holmes will get to a meeting on time.  The protagonists do lots of traveling in Japan, but don't accomplish very much.  This is the kind of book that is more about the journey rather than being about arriving at a destination.  There are some great scenes in the novel, but I'm not sure that this sort of narrative is compatible with the mystery genre.

Many other reviews have complained that Dreaming Spies is slow.  How slow is it?  Let's just say that it literally put me to sleep twice.  The first time I was on a bus and discovered I'd missed my stop when I woke up.  I kept on hoping that Laurie R. King would deliver, so I persisted.   Eventually, I was rewarded when the investigation goes into high gear starting at 66%.  Still I felt that I didn't get enough of a payoff.  The real mystery wasn't the perpetrator in the blackmail plot.  It was a secret document.   The Japanese characters were so dedicated to making certain that the contents of this document are never made public, but the reader doesn't even get a clue  about the secret that they are risking their lives to defend.  So when I closed the book I felt cheated. What was it all about? Was it worth all the danger?  I wish I knew.