The Different Types of Sisterhood...Sisters of Heart and Snow by Margaret Dilloway 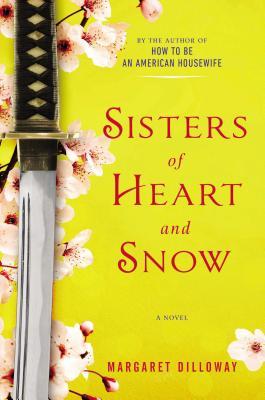 This is a very engrossing tale that shows the different types of sisterhood: that which we choose (of the heart) and that which we're born with. They are bonds of equal strength.

There are two stories here: late 1100s Japan, following a woman soldier (samurai) and her sister of the heart, her lover's wife. The women are very different, one being of home and hearth, one being a fighter. The modern story follows two sisters struggling to find themselves late in their middle age and let the past be in the past. Their childhood has molded them into people they don't always want to be.

We're kept in a lot of suspense with the modern tale. What secret did their mother keep all those years? What is their dad going to use to blackmail Rachel into giving up power of attorney? (Her mother has dementia and is in a home). Will Rachel and her dad make amends? What is going on with Rachel's daughter? This kept me reading even though at times I felt the story dragged. Don't get me wrong; I liked the book, but at the 3/4 point, I just wanted to get the answers and move on. For me the book was longer than it needed to be, for the story it contained.

I especially enjoyed the theme about control. Controlling everything and everyone isn't the answer.

I do have some quibbles.

I think the historical tale...there wasn't enough time spent on it, while the modern tale was way too drawn out. I was apparently supposed to feel this great bond between Yamabuchi and Tomoe, but I really didn't. Their bits were too short for me to really grasp any closeness between them.

Except for Rachel, I didn't find these women very strong. They all submit or lose themselves in a man. After the way that bratty child spoke to Drew at the carnival and the way the kid's father pandered to the child, I'd have run away, fast, not subjected myself to more of that behavior. Quincy is obsessed for a man. Tomoe may be great with a sword but she's weak for a crazy man who doesn't treat her well. She always does his bidding even when she doesn't agree with him. Yamabuchi is somewhat strong now that I think on it. She faces a lot of crap and even though she's in a life she wasn't trained or ready for, she tries her best. Rachel and Drew's mother...I'm not even touching that one. Some things were still not clear to me about her in the end. I get she sold her soul to the devil to have a better life, but why be such a horrid, negligent mother? And I realize she was holding part of herself out of shame, but still...this woman was hard for me to comprehend.

Rachel bucks up in the end, once she finally stops giving her father the power to affect/hurt her. In my eyes, Rachel had the strongest story and moral and strength.

Don't give people the power to hurt you and they can't. At some point in life, you must be able to brush their words off, see them for what they are.

Despite my quibbles, I enjoyed the book and found it well written. The characterizations were distinct and consistent, something not easy to do when writing about five or six different women.