Cattle Kate: A Historical Western That Corrects Misconceptions and Educates While Causing an Occasional Rip-Roaring Laugh 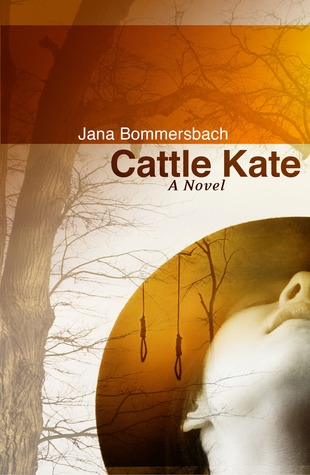 I'd spent most of my life working with Pa and my brothers, so I knew how to work with men to get things done. First thing, you can't be bossy. They don't like that. They'll do something the wrong way rather than take a bossy command from a woman.

First a little background...Cattle Kate was a real woman. She immigrated with her family from Canada to Kansas and then left her family to strike out on her own in WY Territory where she became the first female homesteader and cattle owner. She merely wanted to have land and raise cows, but back in those days, the cattle barons, though already filthy rich, couldn't get enough and when Kate refused to sell her land for their grazing purposes, they saw to it she was lynched.

She was then labeled an outlaw and whore.

This novel corrects that misconception, shows us the real Kate, who while not necessarily squeaky clean (keeping her marriage to Jimmy a secret in order to double their land is a bit sneaky), does not deserve the outlaw label. The novel follows her life from Canada to Kansas to WY, from childhood to abused married woman, to cattlewoman and pie-maker. We meet a woman with big dreams who is a bit naive. (I'm not all that certain Jimmy really loved her. I think he wanted to use her to double his land all along, but at least he was nice about it.)

I became very wrapped up in this woman's life in the wild west. I also learned an amazing amount about cattle laws, about grazing, about the "war" between the cattle people and the homesteaders, about the fights over water, about Cheyenne and WY history, even about the different cattle brands and how to read them. I wish I'd read this book before driving through Rawlins many years ago. I'd have appreciated where I was at a lot more and perhaps would have looked for a museum or something, and most def would have visited Independence Rock.

I also picked up things like the town of Oskaloose being run by women and was inspired to look up more about Esther Hobart Morris, the first female justice of the peace and WY's mother of the suffragette movement. (Someone, write a novel about this gal, please!)

And I suppose you're wondering how I got any rip-roaring laughs out of such a tragic tale... There is humor all over in this story. From her ranchhand telling jokes (the cowboy from Texas who had to walk) to just bits in the narrative told in a funny way: That wrangler stood there with a mouth so open, flies thought they'd found themselves a hotel. I love how the author did this, kept us smiling and laughing despite the tragedy we knew was coming.

My only complaint is Ella dies too soon in the story. At about 66% we start reading about the aftermath, when her good name was tarnished for the sake of the murdering cattlemen. I realize why this is here, but it was hard for me to read as I felt like I was reading about the debasement of a good friend at this point. It also lost me around this point because it began to read like a biography rather than a memoir. Kate's voice was gone.