A Thorn In My Pocket: The Family Context of Temple Grandin


What most readers who pick up a memoir by the mother of Temple Grandin want to know is: how did she do it?  How did she parent Temple so successfully that she realized her potential against such tremendous odds?  I wanted to know the answer to that question too, but I also believed that the woman who gave birth to Temple Grandin must also be pretty awesome .  I was convinced that Eustacia Cutler’s own life story would be of value, and it turned out that I was right. 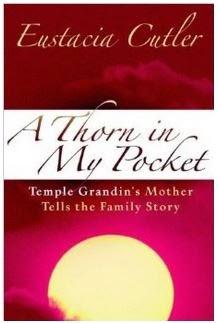 First, it’s important to realize that when Temple was born the psychiatric establishment believed that autism was a kind of schizophrenia.  I think that schizophrenia is a catch all diagnosis that has all the characteristics of the legendary Chimera, a monster with a lion’s head, a goat’s body and a serpent’s tail.  It’s a completely nebulous concept.  We now know that autism is an alternate form of brain organization, but in the late 1940’s children like Temple were just thrown away by their parents, and placed in institutions where they received no education whatsoever because no one believed that they were educable.

Eustacia Cutler always believed in her daughter’s abilities.  When Temple still couldn’t read as she was about to enter third grade, her mother came to the conclusion that Temple had been bored by elementary school readers.  So she started reading her The Wizard of Oz and then handed her the book saying “Here, you try.”  Temple had to learn how to read to find out what happened next.

She also wasn’t only Temple’s mother.   Eustacia Cutler was a singer, an actress, a maker of documentaries and when her husband decided to try to prove her an unfit mother, she became a divorced woman in 1962 with custody of all four of her children.  Due to Temple’s urging, she later became a speaker and writer on autism.

Unfortunately, the research that Cutler did on autism was based on the false premise that autism manifests the same way in all individuals with autism.   Over time, we have learned that there are variations in autism.  Temple’s book, The Autistic Brain, taught me about this diversity among autists.   Yet when Eustacia Cutler wrote A Thorn in My Pocket, she apparently believed that all individuals with autism were like her daughter.

This misperception of the nature of autism led to an extremely contentious online imbroglio that occurred last year.   My perception of the situation is that Cutler was attempting to explain a few cases of adult autistic men being arrested for viewing child pornography.  Her piece took a sensationalistic approach that offended a great many people, and was based on the outdated ideas I discussed in the paragraph above.  For a more insightful and knowledgeable essay dealing with autistic men and child pornography, please read this post on the Psychology Today blog  by autistic writer,  John Elder Robison.

So the value of this book isn’t in what it tells us about autism. Its value is historical. It tells us about the social context in which Temple Grandin grew up.  We learn about Temple’s upbringing, her family and heritage.

I was very interested in finding out that Eustacia Cutler’s father, John Coleman Purves, was part of a team that invented the flux valve which generates the heading information that is used in auto pilots on airplanes.  Cutler points out that her father was a visualizer like Temple.

I was also interested in Cutler’s feminist grandmother, Clara Temple Leonard.  When the governor of Massachusetts wanted to remove her from the Massachusetts State Board of Health, Lunacy and Charity on the grounds that a woman was not a person, Clara Temple Leonard sued for the right to be called a person and won.   Her descendant, Temple Grandin, also established her right to be called a person.

I found A Thorn In My Pocket to be very compelling reading. If you are interested in Temple Grandin and the influences that shaped her life, you may be just as fascinated by it.