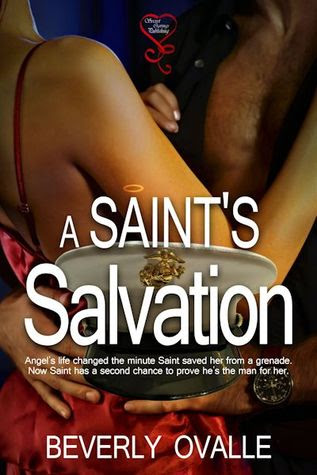 A Saint's Salvation by Beverly Ovalle was a sweet and heartwarming read. Nick is leaving the marine's for the time being and going home for the holidays to surprise his family. The one thing he is looking for is for someone to simply hold him.

When he left for the marines, he had a girlfriend. Not long after she sent him a note breaking up with him, a grenade went off where he was, injuring him and several others. After he recovered in a hospital, the desire to be with family is strong.

This story tells the journey Nick has on his way home. He is able to find love again, and it's with someone who understands everything he has been through. I can't tell much, because this is a novella, and sometimes they are harder to review without giving away too much plot.


There was an intimate scene in the story, but it wasn't over the top detailed, so I'd give this a heat level of 3. I think it was perfect though for the story.

*Note: This story is told only in the mail point of view.*


What's the book about:

Corporal Nicholas 'Saint' Santiago needs to go home to reclaim the man he used to be. To be the man he was before Operation Enduring Freedom slowly hardened his heart. He needs to reconnect to the values and the reasons he is doing what he does. Saint also needs to try to forget the courageous woman he knows was meant to be his.

Petty Officer Angelina Jones' life changed the moment Saint saved her life. She survived the blast but now has to deal with the fact that she will never be whole. Knowing Saint received a 'Dear John' letter, Angelina has no intention of being his rebound romance. She needs to be loved for herself. She needs to forget about the one man she knows was meant to be hers.

They each try to find someone to help them forget.

But what does fate have planned for them?