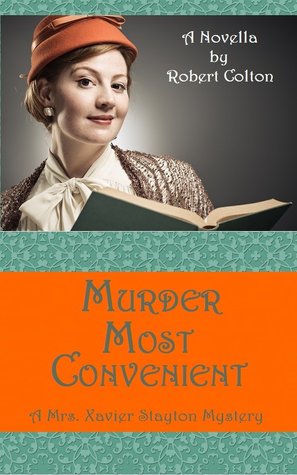 "More men would be better off dying young, before their wives get to know them well enough not to miss them."

It's not often I pick up a Kindle freebie by an author I've never heard of before and find a gem of a story. They are usually so/so. This one is quite good! Think Miss Marple, forty years younger, with twice the humor.

Young Mrs. X, widowed now three years, fancies herself a mystery writer all of a sudden and her and her companion set off for a house in the country...where between a very wacky family and servants, they run into a REAL murder.

The style takes some getting used to at first. The narrative is in first person--not a problem--but it's as if you're reading the manuscript of her story. It even has little notes to her editor or agent in parenthesis. This irritated me at first, but I came to understand it and once I got over the initial feeling of being "jarred" by it, I was no longer bothered.

I enjoyed the heroine and laughed so many times...I lost count. From the dog named Bugger to the sarcastic remarks exchanged between these family members who loathe each other so much... There's not only a murder mystery here, but secrets from the war, the mystery circumstances of her own husband's death, the way she calmly handles the personal questions...there's actually a lot going on in this "little" story.

Highly enjoyable. I'm not going to get into too much details about the mystery itself because that would just spoil it for everyone. As far as setting and writing and humor, the story is excellent. The only thing I disliked was the lack of clues. I like to have some idea of whodunnit and why, but this is one of those mysteries that throws everything at you at the end. Or else I'm just not that bright. LOL

I look forward to book two.