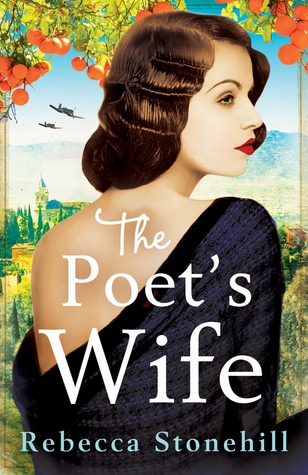 "You are a human being and so is the peasant from the countryside and so is the monk from the monastery and so is the right-wing politician. We may not agree with certain people but nothing, nothing whatsoever, justifies harming them."

There is nothing more confusing than Spain's civil war. Even the most interesting of novels chronicling it have left me feeling slightly bewildered. So I love how this author has managed to lay it out for us, simply, in a way in which the facts will always be in my mind. The story of Spain's hardships is told through three women. First, the poet's wife, Luisa. She shows us Spain before the war, when young girls spoke to potential suitors through gates and parents had a firm say in who their daughters married. While her time is strict, it's not as strict as it later becomes. With a chaperone, she's allowed to go to poetry readings. As a married women, she's allowed to walk the countryside and visit the gitanos. There is music and dancing. People are allowed to have opinions...and meet with those with like minds.

But then the war comes. Luisa continues her story and yet we also see the war through Isabel's--her daughter--eyes. Isabel is my favorite. She flourishes from a follower into a leader with a mind of her own. She's a nurse. She shuns traditions, yet stays in a strict, dictatorship country for her mother's sake. Later, despite the risks, she helps people to die, providing them comfort in their last moments. Through her eyes we see the Republic fall to Fascists and how people must adjust. Through both her and her mother's narratives, we experience the suffering of war: death, fear, secrets, helping others.

And then Paloma, Isabel's daughter, makes an appearance. Here is where I have a quibble. Paloma shows us the post-war Spain, a time when husbands and wives cannot even hold hands in public. When men sit on one side and women on the other. When the church and a dictator rule all. When music and dancing is forbidden.

But I didn't like her and she shows up so late in the story, I couldn't really know her anyway. I'd have preferred the story just stick to Isabel and Luisa.

But I love how this book not only shows us the history of Spain, but also how the women evolved and changed with it. And most of all I appreciate being reminded that we are all human.

The writing is very good, though the tense seems to change at times and it's jarring. There were also typos but this is a digital arc from Netgalley.

I would read this author again.