Out of the Storm by Jody Hedlund: A Small Story with a Big Moral 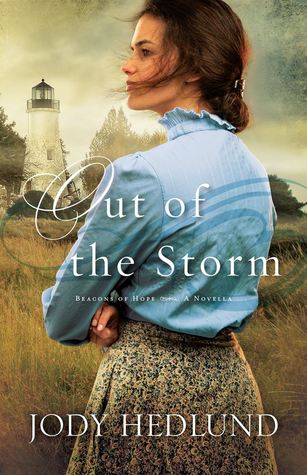 "...whatever our lot in life, whether blindness or some other problem, we can't just give up and stop living."

I worried about discussing what I really enjoyed about this story. I'm not sure it would be considered a spoiler or not. The situation is hinted at early on and it doesn't take a rocket scientist to figure it out, but I got the impression that maybe I wasn't supposed to know as quick as I did. I hope that makes sense.

Regardless, the theme had an impact on me, had me nodding my head and nearly shouting amen.

At this little lighthouse in Michigan resides a young woman and her very overprotective father. She is fully aware that one day she'll be blind. Because of this, she feels she can never marry, never have children. After all, caring for a blind person is a lot of work and why would anyone wish to saddle themselves with that?

That kind of thinking makes me sad. Imagine if we still thought that way today. My husband may never had married me. It's good to read stories such as this in which some ignorant but often thought assumptions are proven wrong. The handicapped can live lives too; can love, can marry. And I'd like to add...to those of my fellow peeps with handicaps, don't hold yourself back from love, from laughter, from dreams, 'cause sure enough the rest of the world does enough of that for us, eh?

Anyway, I enjoyed watching this heroine come to realize that for herself. The story itself is about a man washed up ashore after a bad ship wreck. Some bad men are after him...I really would have liked to have more of that side story. It could totally have been expanded on. Her father wants her and the handsome, injured man to remain apart. They become attracted to each other, however...and sparks just start flying every which way.

This is supposed to be Christian fiction, but except for the reading of a the bible in one point, there was nothing religious, which surprised me, because I thought her mean father presented a nice opportunity for a lesson. He's a bit hateful. Possessive, overbearing, paranoid, and selfish.

The novella actually ends at 60% or thereabouts and the book becomes an excerpt for the the next book in the series. But it's free on Amazon so I don't see this as a bad thing.

I enjoyed the story though I felt there was too little about the bad men after the hero. As I said above, a lot could have been done with that, making a really suspenseful story. And her father really annoyed me.

I got this free on Amazon.