A Light in the Wilderness by Jane Kirkpatrick 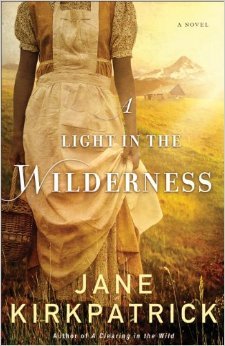 Inside, she didn't have to feel the piercing hurt when a woman "hallo-ed" her and then stopped waving when Letitia turned her dark face toward the westerly-heading wife. She had yet to see another colored woman in all the wagons they'd passed. She longer to share a mother's stories, how Martha curled herself into Letitia's breast, how she nursed, soft and gentle, never greedy, as though she knew her mother had more than enough to give this child. But the women had turned aside.

It's pre-Civil War. There's nothing more treasured to a Negro than "free papers". Unless they get in the wrong hands or a "hunter" tears them up. Letitia has these papers. She plans to take these papers all the way to Oregon with her white husband. Yep. You read correctly.

But sadly, it wasn't legal back then for mixed marriages. All they can do is promise each other to take care of each other, keep each other safe. I guess you could call this a love story, though I couldn't stand the man and doubted his "love" at times. But don't we often doubt the love of men in real life too?

This is the story of that, of trust being stretched, broken, mended. Of a marriage with ups and downs. It's the story of the Oregon trail--rivers forged, sicknesses acquired, rules and captains, Indians, cattle theft, friendships and enemies made, loved ones lost. There's the story of a friendship that knows no color barrier. It's about the plight of not only the American Negro, of former slaves--are they really free as they life a life of fear?, but also of the plight of women, at the mercy of their husbands and being told they must marry again asap when they lose one.

I went through many emotions as I read this. Fear when That G.B. Smith came around threatening Letitia. Anger when Letitia was treated poorly by the other women on the trail. Warmth when she interacted with Nancy. Frustration at her husband's unwillingness to sign some papers. Panic when the flour barrel got swapped. And I was completely immersed in the time period.

And the ending got me so riled up. I had seen it coming, wanted Letitia to act in advance, prevent it, go away, do something...and just as I was about to throw the kindle against the wall, she amazes me. She is amazing, how she stands up for herself and her children and in a way, her people.

I'd also like to add that though Ms. Kirkapatrick is a Christian fiction writer, there was nothing preachy in this story. I've read her books before and this is by far my favorite.

My quibbles: There was so very little of the Native American woman, I feel a tad let down. I don't see why she was even mentioned in the blurb. I also didn't care for the grammar in the dialogue. I get it's accurate, but sometimes it makes an irritating read.

Conclusion: A very thought-evoking historical story about women who braved a LOT: people's cruelty, men's stubborness, weather, life in general, hardships we can't even imagine, fear on a daily basis, and while they lost so much, they never lost their spunk or courage.