Away With The Fairies: The Phryne Fisher Novel In Which Fairies Are Outclassed By Pirates


I am in my late fifties and I’m still saying that I want to be Phryne Fisher when I grow up.  She’s elegant, sexy, witty, generous, courageous, loyal to those she cares about, will help any woman in trouble and oh yes she’s a private investigator who solves mysteries. Since I am such a fan of this character created by Kerry Greenwood, it’s downright odd that I’ve never blogged about a Phryne Fisher mystery.  Well, that’s about to change. 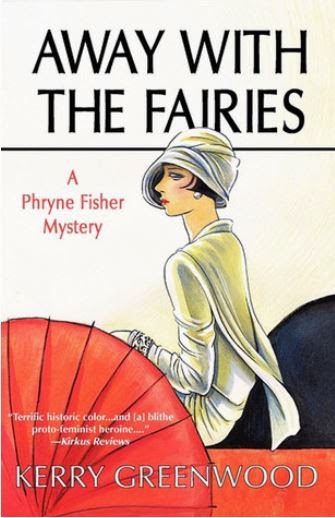 I recently finished Away With The Fairies.  If you are a reader who despises fairies, I would like to reassure you that there is little on the subject of fairies in this book.  The murder victim was an author and artist who was obsessed with them, but the fairies weren’t available for an investigation.

So Phryne decided to become a fashion columnist at the magazine where the victim worked, Women’s Choice.  She’s an excellent fashion columnist, by the way.  I loved her advice about buying a wardrobe on a budget.  Yet I liked the editor even more.  She reminded me of Cosmopolitan editor Helen Gurley Brown.  Her motto was “any woman can”, not just exceptional women.  Any woman can achieve her dreams.  Her magazine was speaking to the “flappers” of 1920’s Australia who wanted to hear that message since they were already living it.

Yet the murder investigation is upstaged by another plotline involving pirates. Phryne’s favorite lover, Lin Chung, had gone to China on a silk buying expedition, but hadn’t returned.  It turns out that he’s being held by South China Sea Pirates.  One of the most notorious was the pirate queen, Lai Choi San.  For more information about her, you should consult the Wikipedia article about her that I’ve linked above.

Phryne is not the sort of woman who would sit around and do nothing while someone she cares about is in danger.  Once she figures out what she needs to do, she takes action and it’s a far more daring adventure than the Phryne Fisher novel I read previous to this one called Dead Man’s Chest which contained no actual pirates.  This novel increased its coolness factor even further by including Phryne's women's club which is called The Adventuresses.

I consider Away With The Fairies one of the best Phryne Fisher novels I’ve read so far.    It had suspense, romance,heroism and feminism which are all characteristics I like to see in any novel.