In Zana Bell's Fool's Gold, Could the Pot at the End of the Rainbow Be Filled With Love Instead? 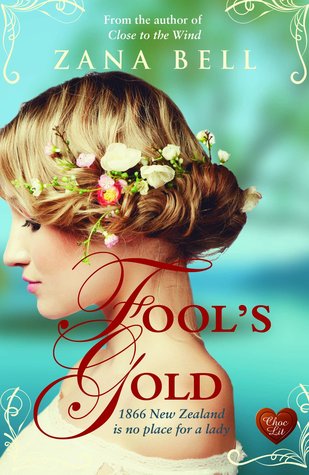 I love a headstrong heroine. I especially liked this headstrong heroine--so stubborn, argumentative, tired of men telling her what to do. Though this stubbornness backfires sometimes, like when she lost her horse. Grrr, lady. But I appreciate her sense of pride, the way she holds herself like a lady in all tricky situations (and there are quite a few!), they way she doesn't hold herself above others, and how when she's knocked down--broke with her dreams drowned in a river flood or when she's robbed--she gets right back up to try again.

The 411: Gwen and her father were on their way from England to New Zealand to take a prized photograph of the rare ostrich, but her father died on the ship, leaving Gwen in dire straits. She can go back to England and marry a man she does not love or she can continue her father's quest (and when that fails, anything else she sets her mind too, seriously) and make enough money to buy her beloved English manor back from the possible groom. But she meets a lovely Irishman...has a run of bad luck...makes some wonderful friends...and finally faces a brutal truth--as does the Irishman.

I really enjoyed this tale. I laughed many times, namely over the "dancing girl" fiasco. I warmed to many of the characters--the maid, Stella, Jack, Ben, and of course, Quinn. I became frustrated with them too--Quinn's refusal to practice what's he meant to do, Gwen's refusal to let go of her manor. I felt as though I was living the characters' lives right along side, the sign of a superb historical novel.

And I feel there's a moral in the end. Why strive to be what you yourself hate? And--oh, here's another--just what really makes a lady? Or a gentleman for that matter? The story shows how a titled and wealthy man can be a rogue while a miner can have the warmest heart.