Can The Girl in the Steel-Capped Boots Prove Her Worth as An Engineer? 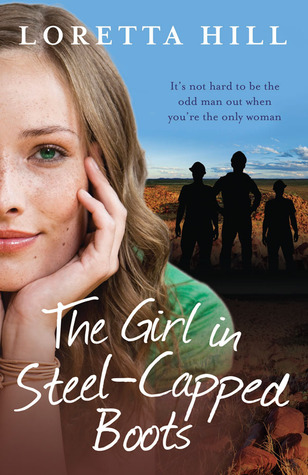 Did all men really think that just because she was a girl, she'd never fit into the construction industry? Steel was just iron with a dash of carbon, for goodness sake. Lipstick had a more complicated chemical structure.

I actually read the author notes at the end of this and was intrigued to discover that the author was an engineer on the site of a wharf in 2001. And the Cape Lambert wharf really was widened. To me, this makes the book even cooler.

I enjoyed this story. I think we've all been there--men and women both. Fresh out of school, eager to prove yourself, inexperienced and not taken seriously, nervous that you'll f*ck up, as Carl in this book would say. (Trust me, once you read this book, you'll get that little goof of mine up there. What a character!)

Anyway, Lena is in the above-mentioned situation, only she's not only green and a new graduate, but she's a woman in the manly world of construction. She's got to prove herself and then some...as well as learn how to handle all the sexual harassment, discrimination, jokes, rumors, come ons. She must learn to be one of the guys while at the same time not lose sight of who she is.

My favorite bits were when she put the men in their place--either through words or by playing jokes on them. I enjoyed all the ribbing and reading about her making friends. Her character really grows in this story too. At first I thought her kind of a spoiled diva, but she proved her worth. I also really admired how important it was to her that she prove she was worthy of her degree. (There's a backstory there that I don't want to spoil.)

There's a romance with the client...and he has an interesting story too. It takes us to court, where a case is presented that really makes the reader think about a unique situation. I wish there'd been more of this, honestly. I LOVE Law & Order-type things.

The author states in the notes that she simplified a lot of engineering things like jargon and functions of the port and stuff. Here's where my quibble comes in. I didn't know what a jetty was. Had to look it up. I could have used more jargon/detail. I also would have liked it, because I consider engineers some of the smartest and coolest people ever. I wish I was one! I find their work fascinating. I imagine readers who pick up books for the romance, however, may not feel the same.

A great read that takes one to Australian Outback complete with scary roos and beautiful whales. A fabulous story of a woman making it in a man's world and giving them what-for, but nice like. Also, plenty of funny moments. I ESPECIALLY LOVE CARL. I know men like him and he just cracked me up so much. This one is worth your time. *If you have a problem with F-bombs, this one is not for you. Feel I should mention that. Hey, it is a construction site... I didn't have a problem with it, but I know some people will.