Yakimali's Gift: the Gift of Truth and Acceptance #GIVEAWAY

I love it when a moral appears within a story, or food for thought, and this novel gives one a lot to think about. Within the pages, there's a theme of acceptance. Accept yourself and others for who you/they are. Don't try to change people and don't try to change yourself for others. Fernanda, the heroine, is a girl who must realize this and also must learn to accept not just one, but both cultures she comes from. She half Spaniard, half Pima Indian. Why is one considered better than the other? It shouldn't be...

And her gift is a gift of truth. What begins as a trek across Mexico into California with a large group of settlers becomes a journey to find the truth, about herself and her Pima history. 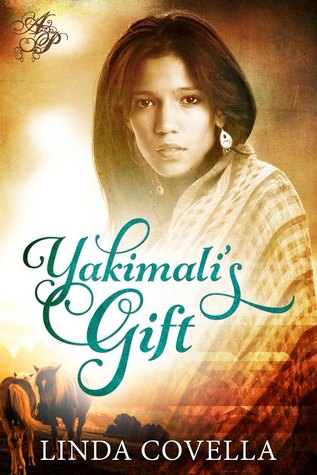 The trek itself was fascinating. The settlers face all kinds of hardship as they ride mules and horses across the desert and up into the mountains and across rivers. Along the way they face water shortage, freezing-cold temperatures, starving animals, and meet a variety of friendly Native American tribes. I really enjoyed this part, seeing how the Yumas and Pimas interacted with settlers, learning about their dress, discovering their troubles with the missions. It brought up another good question/food for thought: when does organized religion become a form of slavery?

Obviously, I got very wrapped up in this story and it evoked a lot of ponderings. I appreciate stories that do that and Ms. Covella gets a huge thumb's up from me.

Fernanda is a young woman with typical young-woman emotions: insecurity, selfishness, jealousy, oppression. She's confused about her heritage, about what's expected of her vs what she wants to be. She has a huge load placed upon her shoulders and must care for a family long before she's ready. The fact she faces all this while on this excruciating journey is admirable. At times, I didn't care for her actions, but in the end, she "grows up" and realizes her mistakes and attempts to change them. I really like this heroine.

The only thing I didn't care for is the love triangle. It was necessary to the story but at times was just kinda juvenile. But this is a young adult story, so it's to be expected. It just went on too long for me.

Much thanks to Historical Fiction Virtual Book Tours for a digital galley.

It’s 1775 in Mexico, New Spain, and 15-year-old Fernanda Marquina, half Pima Indian and half Spanish, can’t seem to live up to her mother’s expectations or fit into the limited female roles of her culture. While she tends her garden, matches wits with buyers and sellers at the weekly market, and avoids Mama’s lectures and the demands of Nicolas, the handsome soldier pursuing her, Fernanda grabs any opportunity to ride the horses she loves, racing across the desert, dreaming of adventure in faraway lands.
But when a tragic accident presents her with the adventure she longed for, it’s at a greater cost than she could have ever imagined. With her family, Fernanda joins Juan Bautista de Anza’s historic colonization expedition to California.
On the arduous four-month journey, Fernanda makes friends with Feliciana, the young widow Fernanda can entrust with her deepest thoughts; Gloria, who becomes the sister Fernanda always wished for; and Gloria’s handsome brother Miguel, gentle one moment, angry the next and, like Fernanda, a mestizo–half Indian and half Spanish. As Fernanda penetrates Miguel’s layers of hidden feelings, she’s torn between him and Nicolas, who has joined the journey in the ranks of Anza’s soldiers and whose plans include marrying Fernanda when they reach California.
But propelling Fernanda along the journey is her search for Mama’s Pima Indian past, a past Mama refused to talk about, a past with secrets that Fernanda is determined to learn. The truths she discovers will change the way she sees her ancestry, her family, and herself.

Linda Covella’s varied job experience and education (associate degrees in art, business and mechanical drafting & design, a BS degree in Manufacturing Management) have led her down many paths and enriched her life experiences. But one thing she never strayed from is her love of writing.
A writer for over 30 years, her first official publication was a restaurant review column in a local newspaper, and as a freelance writer, she continued to publish numerous articles in a variety of publications. But when she published articles for children’s magazines (“Games and Toys in Ancient Rome” and “Traveling the Tokaido in 17th Century Japan,” in Learning Through History magazine, and “Barry’s Very Grown Up Day” in Zootles magazine), she realized she’d found her niche: writing for children. She wants to share with kids and teens her love of books: the worlds they open, the things they teach, the feelings they express.
Yakimali’s Gift, a historical novel for young adults published by Astraea Press, and middle grade paranormal The Castle Blues Quake published by Beau Coup Publishing are her first novels.
No matter what new paths she may travel down, she sees her writing as a lifelong joy and commitment.
She’s a member of Society of Children’s Book Writers and Illustrators (SCBWI). She blogs about writing on herwebsite and blog. You can also connect with her on Facebook and Twitter.

To win one of three $10 Amazon Gift Cards please complete the Rafflecopter giveaway form below. Giveaway is open to US residents only.

Winner will be chosen via Rafflecopter on October 11th and notified via email.

Winner have 48 hours to claim prize or new winner is chosen.
a Rafflecopter giveaway