Night of a Thousand Stars: Not A Credible Protagonist

The last book I read by Deanna Raybourn was the Lady Julia mystery, Dark Road To Darjeeling, because it took place in India. I liked it very much.  So I thought it was possible that a Deanna Raybourn book taking place in the Middle East might be just as welcome.  That's why I requested Night of a Thousand Stars from Net Galley, and this is my honest review. 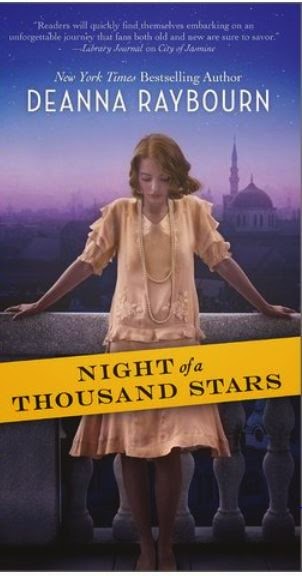 I admit that I found the central character, Poppy March, somewhat sympathetic at the outset.  She was running away from her wedding.  It would have been a very tedious marriage, after all.  Yet I couldn't imagine why she waited until the wedding to decide that she couldn't go through with it.  I also enjoyed the eccentricity of her artist father as well as the background about the unconventional March family.  I don't consider these details spoilers.  This is the set up at the opening of the book.

Look before you leap is very sound advice.  Unfortunately, it's also advice that Poppy never heeded.  Another way of putting it is that she never thought through anything before acting.  I was exasperated by the fact that she didn't seem to learn from experience.  After a while, I started considering her appalling rather than appealing.

So Poppy March gallivants recklessly through all sorts of dangers, but people who probably should know better think that she has potential.  At the head of this list would be Sebastian, the hero of the narrative.  He introduces himself to Poppy with the unlikely surname of Cantrip.  The second definition of cantrip in The Free Dictionary is a mischievous trick.  If  I were Poppy, it would have immediately occurred to me that this is a pseudonym.  Sebastian is rather mysterious, but definitely dependable.  If it weren't for Sebastian, I doubt that Poppy would have survived all her risk taking.

Lady Hester Stanhope, a historical personage who was an adventurer in the Middle East, is mentioned a number of times in this book.  I imagine that Deanna Raybourn thinks that readers should consider Poppy akin to Lady Hester.  In my opinion, Poppy wasn't in Lady Hester's league.  Please read a biography of Lady Hester Stanhope.  She garnered respect while defying conventions, and expanded possibilities for women.  She was the real deal because she made an effort to understand the people of the region.  She didn't just blunder her way through Syria and Palestine.

Deanna Raybourn seems to have created a more successful woman adventurer in the aviatrix and explorer Evangeline Merriweather Starke, who is mentioned in Night of a Thousand Stars but never actually appears.  She certainly sounds like a character that I would have preferred over Poppy.  Evangeline is the central character of City of Jasmine.  It definitely looks like I read the wrong book.

The resolution of Night of a Thousand Stars was from my perspective totally incredible.  By this I mean that I couldn't believe it for a moment.  I won't reveal the specifics, but the idea that Poppy belongs in a responsible position where lives might be riding on her decisions seems like a spectacularly foolish notion.  It sounds more like Poppy's own wish fulfillment fantasy than a realistic possibility.


New York Times bestselling author Deanna Raybourn returns with a Jazz Age tale of grand adventure…
On the verge of a stilted life as an aristocrat’s wife, Poppy Hammond does the only sensible thing—she flees the chapel in her wedding gown. Assisted by the handsome curate who calls himself Sebastian Cantrip, she spirits away to her estranged father’s quiet country village, pursued by the family she left in uproar. But when the dust of her broken engagement settles and Sebastian disappears under mysterious circumstances, Poppy discovers there is more to her hero than it seems.
With only her feisty lady’s maid for company, Poppy secures employment and travels incognita—east across the seas, chasing a hunch and the whisper of clues. Danger abounds beneath the canopies of the silken city, and Poppy finds herself in the perilous sights of those who will stop at nothing to recover a fabled ancient treasure. Torn between allegiance to her kindly employer and a dashing, shadowy figure, Poppy will risk it all as she attempts to unravel a much larger plan—one that stretches to the very heart of the British government, and one that could endanger everything, and everyone, that she holds dear.

A sixth-generation native Texan, Deanna Raybourn grew up in San Antonio, where she met her college sweetheart. She married him on her graduation day and went on to teach high school English and history. During summer vacation at the age of twenty-three, she wrote her first novel. After three years as a teacher, Deanna left education to have a baby and pursue writing full-time.
Deanna Raybourn is the author of the bestselling and award-winning Lady Julia series, as well as, The Dead Travel Fast, A Spear of Summer Grass, and City of Jasmine.
For more information please visit Deanna Raybourn’s website and blog. You can also find her on Facebook, Twitter, and Goodreads.

Tuesday, September 30
Review at Flashlight Commentary
Spotlight & Giveaway at Passages to the Past

Thursday, October 2
Review at Ramblings From This Chick

Friday, October 10
Review at History From a Woman’s Perspective

Monday, October 13
Review at A Chick Who Reads

Tuesday, October 14
Review at Reading the Past
Spotlight at CelticLady’s Reviews

Wednesday, October 15
Review at The Lit Bitch
Review at WTF Are You Reading?

Monday, October 20
Review at The Life & Times of a Book Addict
Excerpt at Historical Fiction Connection

Thursday, October 23
Review at Musings of a Bookish Kitty

Friday, October 24
Review at Curling Up By the Fire

Tuesday, October 28
Review at To Read or Not to Read