Girl on a Wire: Magic, Bravery, Romance and Rivalry in the Circus World


I bought Girl on a Wire by Gwenda Bond as a Kindle First pre-release book and resolved to read it as soon as I had a little bit of breathing space between the R2Rs (Read To Review)and the blog tours.  I love circus novels. Girl on a Wire is a really wonderful example of circus fiction if you like daring stunts and have a taste for the paranormal.  If you were like me, and found The Night Circus by Erin Morgenstern  both inauthentic and superficial, then this book may be the magical circus experience that you were seeking. 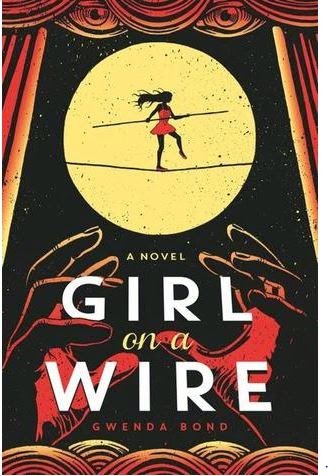 The sixteen year old central character Julietta Maroni, who calls herself Jules, is a wire walker.  They are often called tightrope performers, but they walk on a wire.  Once they did use rope.  According to an article on The Oxford Dictionaries Blog, the first recorded reference to a “walker on ropes” occurred in 1542. I would tend to believe that performers eventually transitioned to wire because it’s more durable.  This circus skill is difficult enough to master without also having to deal with the possibility of a fraying rope.

Jules has a role model in her discipline who actually existed.  Her name was Bird Millman who was a highwire artist with Barnum & Bailey.  She was best known for her grace and fearlessness.  Since a picture is worth a thousand words, this video on the Two Nerdy History Girls blog which documents a Bird Millman performance in 1931 ought to be worth at least ten thousand words.  I would love to read a biography or historical novel dealing with the life of this woman.

I enjoyed the circus traditions and vocabulary included in this novel.  The magical element occurs in the context of centuries old beliefs.  In circus families luck has always been considered an important factor in the success of an act, and losing that luck was often historically ascribed to a curse.

The two rival families that are the central focus of Girl on a Wire are the Maronis whose leading members are wire walkers, and the Garcias who star on the flying trapeze.  The commonality between these circus events is that they are both performed in midair.  This is why their practitioners are collectively known as aerealists.  I have always been a huge fan of the flying trapeze, but I came to appreciate the skill involved in walking that wire as a result of reading this book.  Wire walkers and trapeze artists are both risk takers who rely heavily on precision, timing and luck.   Despite these shared attributes, the Maronis and Garcias have not been allies.  Instead there is a legacy of hatred between these two circus dynasties that is rooted in the past.

Jules wants to uncover the reasons behind the enmity between the Maroni and Garcia clans; especially after she meets a charismatic male performer of her own generation whose surname is Garcia.    Other reviews have called the Romeo and Juliet aspect of this novel predictable.  I prefer to call it archetypal. It’s also important to note that the resolution of this story is far from predictable.   I found it rather ingenious.  Shakespeare would never have envisioned it.   I expect to count this book among my top reads of 2014.