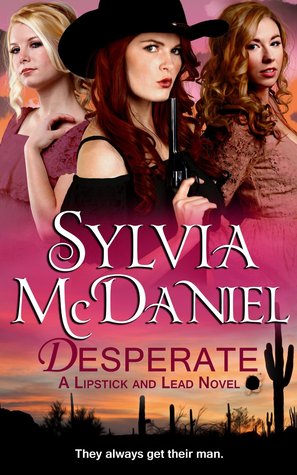 This is a prequel to a series, a short story that introcuces three sisters and apprises us of their situation. It's Texas in the wild west days; their father has just died, leaving these motherless sisters, ranging in age from 15 to 19, only 30 days to pay the outrageous mortgage on their farm.

Meg is the oldest and the one I like. She wears the pants, literally. She has the gumption to propose to the local sheriff. She even goes so far as to feed the man a stolen ham. I like how quick she is to stick up for herself and argue when she feels others are wrong.

But something bugged me. She wears pants and doesn't want to. She fancies herself a clothing designer and wants to wear pretty dresses but at the same time complains she can't work in clothes like that. Well, if you're such a great designer, design a dress you CAN work in. Hum. She complains about this a lot and in the light of the fact she at the same time claims she's a great designer, I lost sympathy.

The story didn't feel very historical either. Except for the fact they use outhouses and get around via horse and buggy and have a house of ill repute, it could very well have occurred nowadays. The diner scenes especially were too modern. The youngest sister annoyed the heck out of me. She's an insolent little brat and too much of the story is spent focusing on her and Annabelle's cat fight over a man. But even more off-putting for me was the fact this woman/child nearly has sex. She's only 15. This was disgusting to me. We're not reading about the middle ages or the Native tribes here.

It's also historically inaccurate. These gals carry around Baby Colt Dragoons and stand around shooting cans in anger. I counted eight shots (with no reloading) from Ruby alone and a Baby Colt Dragoon only carried 5 rounds. Regardless of whether my research is accurate or not, revolvers back then def didn't carry more than 6 shots. And they didn't have electric lights and I doubt they had lanterns in the closets, so how does Ruby see her employer's son in that dark closet?

And while I appreciated how the story showed us the different troubles women faced trying to work day jobs back then, especially with male employers, Ruby and the historical problems ruined the story for me. It should also be noted that they don't do any bounty hunting in this book. And though I really did like Meg despite the irritating clothing thing, I don't think I'll read the rest of the series.

I actually read this novella in the Wild Western Women anthology, but it's available on its own. I received it from a book publicity service.