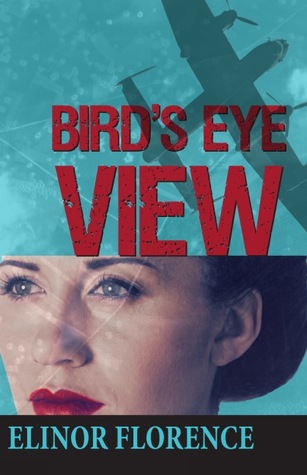 The woman had pink rubber curlers in her hair, and over them a saucepan turned upside down like a helmet. "Look at me frock," the woman said in a shaking voice. "I was that rattled, I put it on inside out."

I know of Bletchley Circle. I know of spies. I'd never heard of photographic interpreters. But when you sit down and think of it, of course they existed; of course they did their bit and they were very important to the war effort; of course some of them were women.

But first, let me say how much I liked this book and why... I loved the heroine. She makes mistakes, learns from them, improves herself, has bad moments, and gets back up. I loved the subtle theme that war may seem glamorous at first, but it is so not. It's sad, tragic, and leaves a trail of heartbreak in its wake. I love the funny bits in the middle of all this sadness: the woman with her hair in rollers in the bomb shelter, the backward movie of the queen, the funny dance-floor episode. I literally laughed out loud. The fact there were such funny moments in a mostly serious story was a major bonus for me. I love a good laugh.

But what's this about? A Canadian woman who thinks the grass is greener on the other side. Surely war is more exciting than farming? She joins up, goes to England to do her bit, and gets more than she bargained for, sees loss, feels fear, gets some tough lessons that war is not glamorous and love isn't necessarily found where you expect or want it. But that's not all. She becomes a photo interpreter and with her, readers learn about how this was during these times, the photos she looked at, the tools of her trade, what railroad tracks and buildings and aircraft fire appeared as. And the most fascinating: the tricks Germans used to throw Allies off track.

Needless to say, I especially loved how she would make a breakthrough, point out how/why we were being fooled, discover bombs pointing at London... Amazing stuff, especially Operation Fortitude. And yet the story also manages to inform us what's going on back "home" in Canada.

I loved this book and have nothing bad to say about it. I highly recommend it to lovers of WWII historical fiction. You'll laugh, cry, and learn something to boot. It doesn't get better than that. I think this is a fine tribute, too, to the aerial photographic interpreters who aided the Allies in WWII. We see all they accomplished in a most entertaining way.

And now, a quick Q&A with the author, Elinor Florence.

Q. During WWII, women stepped into all kinds of positions and military roles. There was the WASP (Women’s Airforce Service Pilots), the ATA (Air Transport Auxiliary), the Land Army, nurses, WAVES (naval reserve), they worked in munitions factories . . . etc. Out of all the things women did, you never hear about aerial photographic interpreters. What made you think of it?

A. When I started my journalism career, I worked as a newspaper reporter, back in the day when we took our own photographs and developed them in a darkroom. So I was very interested in photography. One day I saw a picture in an old magazine of a woman wearing an air force uniform, studying an aerial photograph. I was immediately intrigued by the idea of spying on the enemy through photographs. I kept the idea in the back of my head for years, until I was ready to research and write my novel.

We haven’t heard much about photo interpretation for several reasons. For one thing, photo interpretation was all done in England, primarily at one location called RAF Medmenham, which was a converted mansion north of London. So it wasn’t a common occupation performed by thousands of women across the board. Secondly, military historians tend to focus on combat roles. The men who took the aerial photographs were risking their lives, while the women were just studying the results – so naturally so we hear a lot more about reconnaissance aircraft pilots. And thirdly, photo interpretation was a branch of Intelligence, covered under the Official Secrets Act, and many women took their oath so seriously that they carried their secrets to the grave.

Recently have been a couple of non-fiction books written on this topic. There’s an especially good one called Women of Intelligence: Winning the Second World War With Air Photos, by Christine Halsall.

Q. What can you tell us about what this position entailed?

A. It was bloody hard work, and simply exhausting on the eyes. Interpreters studied every square millimeter of a photograph, usually comparing it with earlier photos to see if they could detect any changes. Since the photos were black and white, they had to learn how to discern among hundreds of shades of gray. And often they were being deliberately tricked by the Germans, who used camouflage to disguise their most important activities. They would cover the roofs of munitions factories with fake houses, complete to the last flowerbox, for example. Or paint their runways with green and yellow blocks to resemble fields.

A. Yes, it really happened. This was such a crazy idea that it actually worked! While planning to invade the beaches of Normandy, the Allies wanted the enemy to think it was going to invade at Calais in France instead – the shortest point across the water from England. So they amassed an entire fake army – actors dressed in costumes, rubber tanks and trucks, fake radio transmissions, fabricated newspaper stories, everything in their power to fool the Germans.

They even let the enemy fly overhead and take aerial photographs while pretending to shoot at them, so the evidence would make it back to Hitler’s headquarters. One of Rose’s duties was to study aerial photos of the fake army to see if it looked realistic. Ultimately, this gigantic deception worked -- the Germans were caught off guard on D-Day when the invasion took place much farther down the French coastline than they expected.

Q. I imagine that besides doing extensive research--which you obviously did--you may also have immersed yourself in period dramas portraying the time period, even if just to get “in the mood.” Can you recommend any favorite WWII period dramas/movies?

A. There have been few movies starring women in uniform, sadly, although sometimes you can see them lurking in the background.

There’s a 1993 movie called For the Moment with a young Russell Crowe starring as an Australian airman training at an air base in Canada. Bomb Girls is a wonderful contemporary television series set in Canada, about young women making weapons. But pretty much all movies filmed in wartime, both American and British, are great for showing the clothing worn then, and the music that was popular.

As far as the business of flying goes – and my heroine does work on a bomber station, interpreting the bomb damage on photos brought back by the crews – I don’t think anything can beat the heart-pounding action of Memphis Belle, made in 1990.

To get myself in the mood, I read books by Nevil Shute – he was writing them during the war itself, and he had an innate sympathy and understanding of people’s feelings at the time. No matter how often I read Pastorale, about a young English pilot and his girlfriend, I can’t help tearing up.

Q. There were little bits of information/stories throughout the story that just delighted me. The Canadian Indian who signed up and said, "Besides, when am I ever going to have another chance to shoot white men and get paid for it?" The bit about two brothers, Malcolm and Morris, who flipped a coin to see who would enlist . . . and their farm being pitted with holes. I'll not say why. Let readers delight in it for themselves. Janet and her sick horse . . . Adrian Stone's bravery . . . But these bits, where did they come from? Are any of these stories real? Perhaps relayed to you via grandparents?

A: I’m old enough that my parents lived through World War Two, and my father served in the Royal Canadian Air Force, so a lot of my “nuggets,” as I call them, came straight from the eyewitnesses. When I was writing for Reader’s Digest, I specialized in what were called “the heart stories.” I learned to recognize and record those fascinating little tidbits that tugged at the heartstrings. By the time I sat down to write my novel, I had notebooks filled with anecdotes, most of which I managed to use. The story about the two brothers is true – they were neighbours of ours, so I had to change their name!

Elinor Florence grew up on a farm on the Canadian prairies, a former World War Two training airfield. She is a career journalist who edited daily newspapers and wrote for magazines including Reader’s Digest before turning to fiction

Her debut wartime novel called Bird’s Eye View, about a young Canadian woman who joins the air force and becomes an interpreter of aerial photographs, is now available from Dundurn Press of Toronto.
Married with three grown daughters, Elinor lives in the mountain resort town of Invermere, British Columbia. You can sign up for her blog called Wartime Wednesdays and read more about her at www.elinorflorence.com. She is also on Facebook: https://www.facebook.com/elinorflorenceauthor and Twitter: @florencewriter.

Giveaway: Leave a comment on this post including your email address for a chance to win a copy of Bird's Eye View. Contest will run for two weeks, after which one of my pooches will choose a winner from their dog bowl. Winner will have 48 hours to get back to me upon contact. Open Worldwide.