Spills and chills. Intrigue and brawling. And all while sitting down.

Hell on Wheels, the ninth book in my Odelia Grey mystery series, involves players in the rough and tumble sport of quadriplegic rugby, which is also a Paralympic sport. Many people, including myself, were first introduced to it through the wonderful documentary called Murder Ball. One of the reasons I went to see that movie was because the lead male character in the Odelia Grey series is Greg Stevens, a paraplegic who eventually becomes her husband. I’d done a lot of research on the day-to-day life of a paraplegic and when Murder Ball came out decided I shouldn’t miss it even if Greg wasn’t a quad.  I was glad I didn’t for so many reasons. I knew as soon as I watched Murder Ball that I would one day use quadriplegic rugby as a theme in a book. I didn’t know when or how, just that I would.

One of the questions I get asked a lot is why did I put my lead male protagonist in a wheelchair?

I originally created the character of Greg Stevens and his loyal canine Wainwright for a different book. That book was never published but almost all of the publishers who turned it down remarked about how much they loved Greg and Wainwright. When I started writing the Odelia Grey series and needed a love interest for Odelia, I thought immediately about Greg. I transferred the character and his dog to that series and never looked back.  Next to Odelia, he is the second favorite character in the series.

While Greg and Odelia have great chemistry in so many areas, his disability and Odelia’s weight make them perfect fictional compliments in another ways. Both are smart, educated and accomplished people who are viewed by general society as “damaged” or “not whole.” Something is “wrong” with them, each for different reasons, when, in reality, there’s not a darn thing wrong with either of them. They are members of the “soft” minorities and face prejudices each and every day and triumph over them with humor and determination. 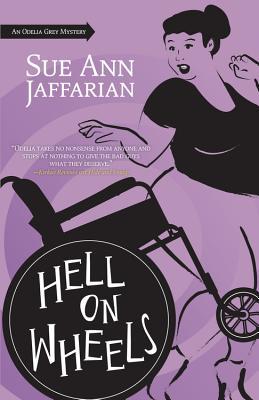 Greg is a seasoned and gifted athlete, especially in basketball. He surfs, sails and is regularly found in the gym. When someone threatens his wife during their snooping into crime, he’s ready with a challenge and not afraid to throw a punch if necessary. He is her knight in shining armor, even if the horse he rides comes with wheels.

In Hell On Wheels I show the various quadriplegic athletes in a similar fashion. They are ordinary people faced with extraordinary circumstances. Some are nice people. Some are not. There’s fighting, broken loyalties and marriage ups and downs. There is also friendship, courage and decency. Just like everyone else found on the planet.

I hope I got it right. Because if I didn’t, I did them all a great disservice. And if you haven’t been to a quadriplegic rugby game or seen Murder Ball, give yourself a treat and do it soon. It’s a lesson in ability, not disability.


We are all just people. Short, fat, tall, skinny, in a wheelchair, bent with age, tattooed or tanned. It doesn’t matter the color of your skin or eyes, your gender or gender preference, or even the gods you worship. In the end, we are all human beings living our lives as best we can on this tiny rock spinning in the cosmos. So let’s enjoy the ride and the diversity of our fellow travelers.

It's GAME ON for popular plus-sized sleuth Odelia Grey
When Odelia Grey and her husband, Greg, attend a rugby match to cheer for their quadriplegic friends, the last thing they expect is to witness a murder on the playing court. Complicating matters is their friendship with the killer--and with the second person who turns up dead. It doesn't help that Odelia's pompous boss, Mike Steele, is embroiled in a mystery of his own--one that leaves more than his super-sized ego bruised and battered.
Odelia enlists the help of family and friends, and gets some surprising assistance coming out of left field. But with a murderer calling the shots, Odelia wonders if she can tackle this dangerous case or if she's out of her league.

Sue Ann Jaffarian is the author of the popular Odelia Grey mystery series, the Ghost of Granny Apples mystery series and the Madison Rose vampire mysteries.
She has also launched a Holidays From Hell short story series for e-readers only.
Like the character Odelia Grey, Sue Ann Jaffarian is a middle-aged, plus-sized paralegal. She lives in Los Angeles and writes mysteries and general fiction, as well as short stories.
In addition to writing, Sue Ann is sought after as a motivational/ humorous speaker. You can visit her on the web at www.sueannjaffarian.com, www.sueannjaffarian.blogspot.com, and on Twitter and Facebook.

Ms. Jaffarian is giving away one winner's choice of a signed copy or an ebook. U.S. residents only. Contest is open one week. Please comment and leave your email address to be entered.
Thank you, Ms. Jaffarian, for this wonderful post.