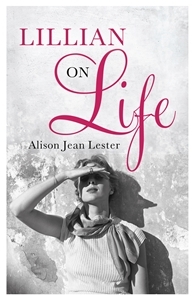 Maybe I would have had sex with Dave after college back in Columbia, but the first time he hugged me, he squeezed me so hard I passed wind.

Obviously I got a few laughs from this book. There's more to that scene up there than I've typed. In this book, Lillian, an old woman--would be seventies in this decade--narrates random bits and pieces of her life, mostly bits about her one-night stands, her married lovers, and her boyfriends all over the world. She also talks about her parents and their marriage. What she says makes me think she herself probably balks at marriage. Perhaps not having seen love in a marriage, she doesn't want that for herself.

I liked this book but I must confess in the end, except for chuckling at the windy hug and at Lillian's thoughts on KY gel and driving outfits, I don't see the point of it. I closed each chapter feeling like I was missing something, some great moral. In my eyes, the only moral is that men aren't going to buy the cow if you're giving the milk free. Then again, I also admired Lillian--or I almost did--for just being her own woman and doing as she pleases, society be darned. Though I think she consistently chose losers for her lovers and at times she smothered her own personality to please them. But that is also part of the story's appeal. The narrator is nothing if not honest.

I think, however, what really disappoints me about this book is that Lillian rarely talks about her work. She starts as a typist then moves to..journalist? It was never clear. I'd have preferred less about her lovers and more about her work and travels at some point in the story. And even though it takes place in the sixties and you would think this bed-hopping, free-loving female would be a bit of feminist, there's nothing about the women's rights movement.

Conclusion: Somewhat pointless, but well written and short and does provide a laugh or two.

I received this via Amazon Vine and though I received the upcoming American version, I like the UK cover better, so that's what's pictured.