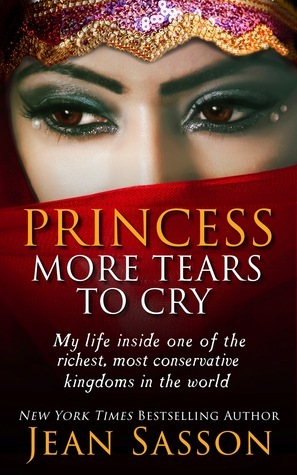 First of all, I haven't read the previous books in this series, about the Princess Sultana's life, but I never once felt lost as I read this, the fourth installment. It's artfully done in a manner in which you get bits from the previous books and yet not so much that you feel you missed something crucial. You can easily step into the Princess Sultana's life...and her life, the people she meets and helps, her family--we can learn a lot from what she sees and who she interacts with.

What I learned from this book was that there are two different Saudi Arabian women and I witnessed this most thoroughly through Sultana's two very different daughters. There's the one who lives her life mostly in Europe, has no desire to marry, and rebels against SA's rules every chance she has, from driving (illegal for women) to wearing "scandalous" clothes. There's the other daughter who utterly and completely brainwashed by religious clerics and wants to oppress her own sex. She's completely happy under the ruling thumb of men--but yet she's also one of the rare in which she's not being beaten or raped on a daily basis. If only she could walk in the other women's shoes...hm.

But most strongly talked about throughout the book is the plight of the women and children. We learn of ghastly tales that really do make one want to cry: female genital mutilation; young girls chained up, raped, killed by their fathers; women divorced and beaten for bearing too many daughters; women destitute and unable to support their children because they are not allowed to leave the house and work; women falling over each other in hallways because they can't see around their face veils; women passing out from  heat stroke due to the heavy attire. And yet at the same time we meet a few women, women doctors and social workers and hairstylists, who refuse to conform and have educated themselves in order to help others.

One of the things that saddened me about the stories was how difficult it is to help the women and children. Many times Sultana steps in with her wealth to help a woman in need, but there can't be enough money to save every single downtrodden woman and child. Saudi women must find a way to change the laws and get around the clerics if ever true help can be given. Sultana will not be able to employ or provide money for every single person and her husband won't be able to bribe every cleric. And they are aware of this. Sultana is aware of this and it's so admirable how she does what she can for whatever woman crosses her path. The lawmakers aren't ready for change yet.

Something else I also took from this book: previously I rather thought all men in SA were abusers and thugs and rapists. Having "met" Sultana's husband and son in this book, I realize many men there have educated themselves about women and our capabilities and perhaps in a newer generation things will change. They are not all bad men. Emotional perhaps, but not bad.

I also got a few laughs from this. Sultana's giving birth to her second daughter and a few other scenes.

I am closing the last page with a new appreciation for the SA women who fight from behind their veils for change in any way they can. I found this book incredibly insightful. It has inspired me to seek ways in which I may aid the cause. My only quibbles have to be that at times I thought some people to be too perfect and also some things were repeated a lot.

I received this book on Goodreads firstreads.