Ten Questions from Tara: An Interview with Karen J. Hicks

Welcome. You’re here to promote The Coming Woman, a historical fiction novel. Tell me, please, what was the inspiration behind this story? 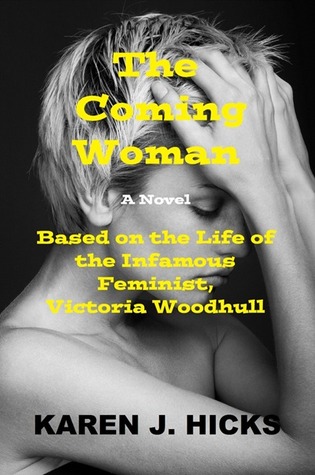 Readers, here's a blurb for you:

"The Coming Woman" is a novel based on the life of feminist Victoria Woodhull, the first woman to run for U.S. President, 50 years before women could even vote!

Running for President wasn’t Victoria’s only first as a woman. She was also the first to own a successful Wall Street firm, the first to publish a successful national newspaper, and the first to head the two-million-member Spiritualist Association. She was the first woman to enter the Senate Judiciary Committee chambers to petition for woman's suffrage, her argument changing the entire focus of the suffragist movement by pointing out that the 14th and 15th Amendments already gave women the vote.

In her campaign for the Presidency, Victoria Woodhull boldly addressed many of the issues we still face today: equal pay for equal work; freedom in love; corporate greed and political corruption fueled by powerful lobbyists; and the increasing disparity between the rich and the poor, to name only a few. Her outspoken and common-sense ideas may shed a new perspective on the parallel conundrums of today’s world.

This bold, beautiful, and sexually progressive woman dared to take on society and religion. To make an example of the hypocrisy in what Mark Twain dubbed The Gilded Age, she exposed the extramarital affairs of the most popular religious figure of the day (Henry Ward Beecher). This led to her persecution and imprisonment and the longest, most infamous trial of the 19th century. But it did not stop her fight for equality.

Victoria’s epic story, set in the late 1800s, comes to life in a modern, fictional style, while staying true to the actual words and views of the many well-known characters.

Back in the late 1980s a friend of mine shared with me an essay she had written for a college class about Victoria. It was very short, but it fascinated me. So I began to research Victoria and the period in which she lived, and fascination soon turned to obsession.

Victoria Woodhull was not afraid to mix it up in the man’s world on Wall Street and never pulled any punches in the articles of her newspaper or on the lecture circuit, talking about topics that women were not supposed to even be aware of and certainly not talk about: business and economy, suffrage, divorce, sex, even politics and international affairs. She hated hypocrisy and inequality and railed boldly against both.

To quote the New York Herald: “Victoria C. Woodhull stepped to the front, and grasping the hostile weapons, concentrated them on herself and undertook to receive the full charge of ridicule, obloquy, and detestation in the hope that the cause of women might triumph.” Even after losing her businesses, homes, health, and freedom for some time, she continued her fight and managed to rise again to the destiny she sought.

I hope so. I admire her greatly, although I am certainly not sure I could be as brave as she was.

Writing about the horrible injustices and gross inequalities for women and minorities and to Victoria personally really got my ire up.

I spent well over a decade or so researching Victoria and all the historical characters who surrounded her. I read every book I could find and spent countless hours at libraries and University archives (this was before you could find the wealth of information we now have available on the internet!).

I still have files of charts I made to synthesize the material about Victoria and the other personalities by character, date, place, and keywords. Conversations in the book use the characters’ ideas and actual words garnered from books, letters they wrote, speeches they made, etc.

I hope they will do all of the above. My purpose in writing the book as fiction was to make the information about Victoria, about woman’s fight for their rights, and about the period Mark Twain dubbed The Gilded Age more available to persons who might not be interested in reading or studying history. Researching the book brought history alive to me the way school never did.

Where does The Coming Woman take place? If I were a tourist, what would you recommend I see in this town/country?

While Victoria’s early days were spent in Ohio and the Midwest, the main part of the story takes place in New York City. We see the city before the Statue of Liberty stood in the harbor, before Ellis Island became the center for immigration influx it did. Victoria owned a brokerage firm on early Wall Street and ran a newspaper on “newspaper row.” And she frequently the famous restaurant Delmonico’s, to name one site still in business today. In her later years she moved to England and managed a huge estate outside of London.

I think I like the time period I am living in now. I don’t think I would have fared well in Victoria’s time, although hopefully I would have fought for justice and equality as she did.

Publishing this book has been my main goal since I first heard Victoria’s story. I would like to continue writing, and of course see my wonderful granddaughter grow up.

I’m a dog mom, so I always ask this. Do you have pets?

I do not have any pets at the moment but hope to rescue one before too long. I am definitely a dog person and had a wonderful furry daughter for several years until I lost her suddenly. I still feel her presence and miss her so much. Her name was Angel, and she sure was that.

What a gorgeous girl. Thank you so much for sharing this with us. My heart goes out to you. It sounds like Angel was very loved. Good luck with your book and thank you for joining us today.

Karen Hicks is retired and lives in Henderson, Nevada. She recently published her second novel, The Coming Woman, based on the life of the infamous feminist Victoria C. Woodhull, who was the first woman to run for U.S. President. Her first book was a self-help book titled The Tao of a Uncluttered Life. Karen served as in-house editor for author Steve Allen and has written several screenplays, as well as poetry, short stories, and essays.