Suffragette Autumn, Women’s Spring deals with two protagonists.  First, there’s Titanic crew member Ruby Martin surviving the sinking of the Titanic, and becoming involved in the women’s suffrage movement after her return to England.  Then there’s Alexander Nash, a rough and tumble working class Londoner who also survived the Titanic and unexpectedly becomes involved in the women’s suffrage movement as well. 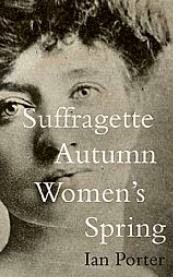 To give you a taste of this book, here’s a quote:

“Her thoughts then drifted back to the sinking as she recalled holding back as the last lifeboat was about to be launched, a caricature of a poor working class girl who thought she was not good enough to be saved, allowing men to make decisions over whether she lived or died. It would not happen again. She was as good, though no better than, anyone else; any upper or middle class woman or any man.”  Suffragette Autumn, Women’s Spring by Ian Porter

Tara and Shomeret will be reviewing this novel jointly.  Tara received a free copy from Net Galley.  Shomeret purchased the novel on Amazon.  We have  different perspectives on this book.  Shomeret liked it a great deal better than Tara did.

Tara: The very beginning and thus the first half of this story grabbed me and sucked me in right from the get-go. The Titanic is sinking. The ship is chaos as women and children are rushed into lifeboats. Nash and Ruby meet and he literally throws her overboard into the arms of a crew member. She makes the very last boat.

And once the ship meets its tragic fate, there's frostbite to contend with, and the White Star Line trying to dishonestly bribe third-class victims.

Shomeret:  Perhaps this is a mis-perception.  It was my understanding that the money that White Star was issuing to all passengers that survived the Titanic’s sinking was intended as perfectly legal compensation for pain, suffering and losses. The scandal as I saw it, was that the compensation was so very inadequate for the lower class passengers.

Tara:  I guess because we were seeing it from Nash's POV, I interpreted it the way I felt he was?

Then there's Nash running around beating up White Star employees, and Ruby trying to get justice for her widowed mother... It's really entertaining stuff while at the same time showing readers what went down after the sinking. The drama and tragedy didn't stop once the boat reached the bottom of the ocean, even though its crew were officially unemployed and unpaid at that point.

And strangely enough, I remained riveted until...Ruby joined the WSPU and began getting involved with the Pankhursts. This is nuts, I'll admit. That should have been my favorite part of the book, as into women's rights and history as I am, but to be frank, I found myself more appalled than inspired by the behavior of the women, by their militant antics.

Shomeret:  The second half involving the women’s suffrage movement in England was when I got invested in this novel.  My attention wandered in the first half involving the Titanic.  I had read about the Titanic disaster elsewhere, and this is not a particular interest of mine.  It’s only after I read the entire book that I understood how the two halves fit together.  They were both a record of how the lives of working class people weren’t valued in Victorian England.  Ruby went to Halifax to try to claim her crew member father’s body, and discovered that dead Titanic crew members had received a callous mass burial at sea.  Ruby’s mother received a heartbreakingly low widow’s pension. The White Star Line obviously didn’t care about their employees or their families.

The tactics of the Pankhursts need to be placed in a larger context of protest movements in England going back centuries.   People had to die for the right to read the Bible in English, for example.  Before the Reformation, the Catholic Church didn’t want ordinary people to be able to read and interpret the Bible for themselves.  Today, we take it for granted. People died for what we consider very basic rights for workers in the struggle for labor unions.  Things like bathroom breaks and getting weekends off are the result of what was often a violent and bitter process.   I don’t endorse violence myself, but I understand why Emmeline and Christabel Pankhurst thought it was needed.  Martyrs have historically gained a great deal of support for causes.    It shows people the seriousness of the cause if people are willing to die for it.  It’s important to point out that the WSPU didn’t want to kill anyone outside the movement.  The WSPU were verging on terrorism, but I think the main difference is that terrorists do want to kill innocent bystanders.  The WSPU wanted to make sure that they only attacked unoccupied buildings or locations.

Tara: What exactly do you prove by starving yourself?

Shomeret:  Fasting as a protest goes back to ancient times.  In ancient Ireland, it was called Troscadh.   The goal was to make people feel guilty. The original hunger strikers in Ireland would fast at the door of someone who had committed an injustice against them.  If the person who was the target of the hunger strike didn’t let the hunger striker into the house and ignored the protest, they were violating hospitality which was considered a terrible sin in ancient Ireland. If the target of the protest let it continue until the person died, they would be required to give restitution to the hunger striker’s family.  There’s a web page that provides some history and context for hunger striking in Ireland at  Hunger Strike History in Ireland.   Hunger striking is ineffective if the target of the protest has no conscience or doesn’t think that the death of the protester will have an impact on their reputation.   In this case, the government of England cared very much about suffragettes dying in prison. That’s why their reaction was force feeding.  They understood that martyrdom would increase the number of people who supported women’s suffrage, and they emphatically didn’t want any martyrs for the cause.

Tara:  What do you prove by getting murdered by a horse and risking the life of the horse and jockey? By throwing rocks through shop windows? While I get it was attention-grabbing, I don't think that was the kind of attention they needed. After all, if you act like a hoodlum, you'll be treated like one.

Shomeret:   The woman who sought to disrupt a horse race to call attention to women’s suffrage had actually been expelled from WSPU for being too extreme.  Ian Porter shows that this particular action had negative impact and that there were a number of people who resigned from the WSPU because of their violence.  There was even a split within the Pankhurst family.  Sylvia Pankhurst disagreed with the tactics of her mother and sister.  Sylvia is the Pankhurst who is portrayed most sympathetically in this novel. I think that Ian Porter intends readers to side with Sylvia Pankhurst because she understood the importance of working class support for women’s suffrage and was a pacifist.

Tara: It was also at this point that we begin to see less of Nash. And despite his terrible dialogue--can't understand what he's saying half the time--I really liked his character. He's simple, honest, and gives what for.

Shomeret:  Nash or Nashey, as he was called by his friends, was a wonderful character.  The stereotype is that men like him don’t respect women.  Nash respected anyone who he thought was worthy of respect. That’s why he stood up for Ruby and for Sylvia Pankhurst.  He understood that Sylvia Pankhurst cared about working class people, and that she was working for a better future for everyone regardless of class or gender.

Tara:  I'm so with you on that, Shomeret. I appreciate Ian Porter portraying a man in such a light. Too often in stories tackling this issue, the men are the naysayers. It's good to be reminded that they weren't all against the movement.

Despite the fact that my mind began to drift as I found the WSPU actions distasteful, I did gain a lot from the history revealed about the Pankhurst family, how Sylvia stood for working women and Christabel looked down on them. I learned about the Cat & Mouse law, and also prison life for suffragettes.

The book has one thing really standing against it though, IMO. It's told in omnipresent POV, god-like. This type of narrative prevents the reader from really becoming a part of the tale and getting to the know the characters on a deeper level. And though I loved the Titanic part, in the end, I don't see how--besides the women and children thing and Nash and Ruby having to meet somehow--it ties into the last half. Also didn't see the point for Nash's previous "association" with the Ripper murderer. It didn't quite all tie together for me.

Shomeret:  There are pros and cons for each type of narration.  I agree that there can be less depth in character viewpoints when omniscient narrative is used, but I think that there is also the plus of being able to go beyond a single character's viewpoint.  You can give the reader a panoramic portrait of an entire era which is what I think Ian Porter did very successfully.

As I said above, I thought the two halves tied together by being a working class perspective on both events.  Every time I see the Titanic in a movie or on TV,  there are always scenes of  wealthy passengers dancing just before the disaster.   The poorer people in steerage and the Titanic crew are invisible to history.  In the second half, Sylvia Pankhurst eventually hires Ruby to start a suffrage school.  Her mother and Christabel had no time for the uneducated.   Sylvia thought it was important to educate them, so that they would understand the issue and its significance for their own lives and their families.

I think that the Ripper case was brought up to show both how tough Nash was, and that he cared about women that society considered outcasts.  Jack the Ripper killed prostitutes.  It’s a famous case, but the authorities probably didn’t investigate as thoroughly as they might have if the victims were wives or daughters of wealthy and prominent men.  His victims were socially invisible like the lower class victims in the Titanic disaster and the people that Sylvia Pankhurst made her priority.  For me, it does all tie together.  I thought this was a really excellent novel.

Tara: Good point. For some reason, I just couldn't see the tie, but you make an excellent case.