Marshall Fields Portrayed as Dashing, Caring Lover and Shrewd Businessman in What the Lady Wants 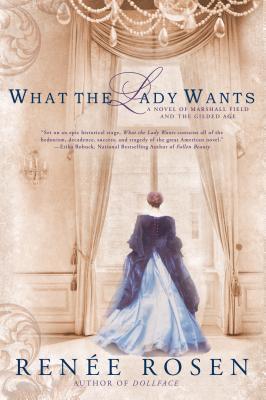 I wholeheartedly love the television shows The Paradise and Mr. Selfridge. That's why I was so eager to read this story, about Marshall Fields, the famous department store owner of Chicago, and his mistress, Delia. I was deeply engrossed in this tale. Yes, it's pretty much just a love story, the story of an adulterous affair and the complications behind it, but it's not a lewd affair. You can sympathize with both the hero, Marsh, and Delia.

Never judge a couple until you know their stories and situations.

Delia and Marsh love each other and are both in interesting marriages. Marsh is married to an emotionally unstable and vicious woman and Delia is married to a man who does not desire her. So readers will find themselves rooting for the couple despite the scandal.

But Delia grated on me at times. I thought her character was well done as far as the affair. She battles with guilt, doesn't know how to handle Nannie, ponders whether or not she's being punished when bad things happen to her--all feelings to be expected from a woman in the middle of an affair. Following her, we see how society shuns her and yet not Marsh, who is engaging in the same "crime".

I felt that was superbly done, as is the writing. But what got on my nerves was Delia's lack of a backbone and frankly, her overall...worthlessness and inability to think for herself. She's literally just a rich woman who has never done a day's work in her life. She's coddled, pampered, never steps foot in her own kitchen. Does nothing. Has earned nothing. This becomes more evident as the unions begin to protest against her lover's harsh ways. And really, is an eight-hour work day so much to ask? While workers are fighting for their rights, she sits there sketching, playing the piano or solitaire. That's her life. To be fair, the author stayed true to the real-life woman, I'm sure.

They hated the wealthy and all they'd had to do was look at her in her fine tailored dress and her dog with her diamond collar, and they would know that she was the enemy.

I hated how Delia just blindly defends Marsh and judges the protesters without even once trying to see how they live their lives. She lives in a jeweled bubble with no knowledge of the lives of the workers, the poor, and doesn't care. It's not until 60% into the story that she forms any kind of opinion of her own on an issue--the sham trial and following execution.

But even confined to her bubble, Delia manages to inform readers of the worker riots, the fires, and the coming of the World's Fair. And here I want to say that I began to like Delia. Keep in mind that we're with Delia from a teenager to old age. In this time period there's going to be growth and maturity. I liked how she took care of her sister (though at the same time I think she was spoiling the family), how she encouraged Marsh to have better relationships with his kids, and what she did at the Chicago World's Fair--though I'd have liked more details about what exactly she was doing. The bit about the woman architect was wonderful.

My other quibble is that the story never takes us into the lives of the store employees. As a Selfridge fan, I was rather hoping this novel would also go behind the scenes. Unfair expectation of me, however, as the story is told following Delia, a woman who as I said above, lives in her jeweled bubble. I seriously doubt she'd ever have gotten to know any store employees. And the blurb doesn't promise this, so I should not have expected it.

So if you're a Selfridge fan, pick up this book expecting not the love affairs of the employees or anything like that, but strictly, the romance between Selfridge and one of his many actress lovers, and you won't be displeased. Despite my above quibbles, I found this to be a very engaging and entertaining story. I'll be reading by more Renee Rosen.