Be A Good John (or Jane) Doe

"You're supposed to be smart. If it was raining one-hundred dollar bills, you'd be looking for a dime you lost."

I have author Delynn Royer and her recent blog post to thank for me having watched this movie at all. Though a long-time fan of classic movies on TCM, my time is limited and if the little sentence next to the movie in the TCM Classic Movie Guide doesn't grab me, I don't record it. And frankly, "A reporter's fraudulent story turns a tramp into a national hero and makes him a pawn of big business" doesn't sound like much of a story.

But this movie was an absolute gem! That sentence sums it up nice and quick, but there is so much more, mainly an important message within this movie.

Your neighbor....he or she may not be a bad guy or gal. Don't forget she or she is a just a regular John or Jane Doe. We can't all be lords and ladies, dukes and duchesses, rich, movie stars, business tycoons, or even the president. Some of us have to be John or Jane Does, just regular Joes. But without us laying the train tracks, there'd be no trains going anywhere. Without us fixing the planes, there'd be no flying. Without us serving or selling the food, we'd go hungry.

Us John and Jane Does make this world keep going.

First of all, it stars the wonderful Barbara Stanwyck. Co-starring is Gary Cooper. She's the reporter and that quote I shared up there about the raining of bills, that's what comes out of her sassy mouth when she's told to go home and have babies. (I lurve her!) She's got the idea of the century: sell more newspapers by printing fake letters that rant and rave about the government and society in general, penned by John Doe. 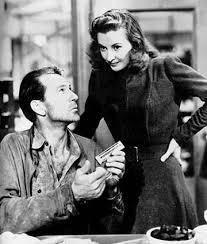 But it becomes so much more and she has to find a man to be John Doe. (That's where Cooper comes in.) And it leads to a movement. It leads to people getting to know their neighbors after years. There's one little side story in particular that had me nodding my head, when a man who always thought his neighbor was a mean old grump learns that in fact, the reason the man slams his door and plays his music loud and never responds to a hello is that he's not rude...wait for it...he's deaf!

Heck, John Doe's speeches had me nodding my head and thinking about how I need to be kinder to my neighbors too, or at least not judge them or think the worst so quickly.

But as usual, rich politicians step into the picture and try to turn it all into their favor...meaning money in their pockets! And there's romance, though it's very very subtle. Blink and you'll miss it until the closing scene.

Acting: superb. Picture: clear. Story line: unique and worth your time. Heroine: Awesome. She has a great idea. Gets swayed to the wrong side for a bit, but in the end, she's a good cookie who knows right from wrong and sticks to her guns.

Though made in 1941, the message within the lines should still be remembered and followed today.

I watched this on TCM.