Ella Clah: The TV Pilot That Should Have Made It

Normally, an unproduced TV pilot script wouldn't be available for review.  I purchased this one on Amazon.  It's based on a series of mystery novels by Aimee and David Thurlo.  I found out that the pilot is available as a book when I recently checked The Aimee and David Thurlo Website in order to cite a title correctly in my review of Manroot on this blog.

I also received some sad news from the Thurlo website. Aimee Thurlo died this past February.   I first saw the name Aimee Thurlo when I picked up her Harlequin Intrigue Spirit Warrior back in the 1990's and was amazed to see aspects of Navajo culture in a romance.   After that, I read every single one of her Intrigues and never condemned the entire romance genre out of hand again. Since I am a mystery reader, I later followed the Ella Clah series whose covers finally revealed that Aimee Thurlo's husband David had been her co-writer.  The Ella Clah books center on a Navajo FBI agent who returned to the reservation and joined the Navajo Tribal Police.  I also read the cozier Sister Agatha series about a New Mexico nun who rides a Harley.

I decided to read and review the Ella Clah pilot script in memory of Aimee Thurlo though it was actually authored by well-known TV writer and producer Lee Goldberg in collaboration with William Rabkin. 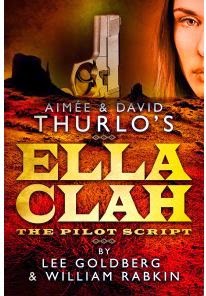 When I was active in the fandom for the Highlander TV series, I learned from staff writers Gillian Horvath (who blogs at Athena TV) and Donna Lettow  about the challenges of  getting a series on television and keeping it on the air.  So I knew before I read this script that issues other than quality could have prevented it from being produced.

Because there are more limitations in writing for television than there are in writing novels, the Ella Clah in the script could not be exactly the same as the one that the Thurlos created. For budget reasons Goldberg and Rabkin created an alternate lifepath for Ella Clah.  She remained an FBI agent based in Albuquerque.  Yet the pilot script does involve a case that required a visit to the Navajo Reservation.  Her parents and brother are part of the plot. It becomes clear in the course of the narrative that the conflicts within her family had motivated her to make a life for herself elsewhere. Yet I found the final scene between Ella and her mother rather touching.  I also liked the relationship that Ella developed with her Latino FBI partner and the background that was developed for him.

There are story lines included for episodes of the proposed series.  The story line I liked most was the one dealing with a Navajo woman activist whose organization's offices were burned.

I was excited that Goldberg and Rabkin had approached the Native American actress Irene Bedard about playing the role of Ella Clah.  She agreed in principle to play the role at the time, but that was more than a dozen years ago.  If an Ella Clah series went into production now, I'd imagine that it would appear on a cable channel.   As Aimee and David Thurlo pointed out in the foreward that they wrote for this book edition of the pilot script, "If Longmire can make it, can Ella really be far behind?" They were referring to an A&E series based on mystery novels by Craig Johnson whose protagonist has a Native American sidekick played by Lou Diamond Phillips.  I would like to think that Ella Clah could have a successful run on TNT, Lifetime or Hallmark.