The Impeachment of Abraham Lincoln: The Alternate History of an American Icon

I decided to read and review The Impeachment of Abraham Lincoln by Stephen L. Carter some time ago, but it's a bit of a tome for someone in graduate school, so I put it off for when I'd have more time available.

I wanted to read it even though I'm the only person I know who isn't hugely impressed by Abraham Lincoln.  You see, I discovered that he had to be pressured into the Emancipation Proclamation.  Who was the man who forced Lincoln to free the slaves?  His name was John Charles Fremont. Today he is mainly known as an explorer, but he was also the first Republican candidate for President of the United States.  He ran on an abolitionist platform. Fremont had a chance to act on his principles as a General in the Civil War.  He issued an emancipation proclamation that freed the slaves in the military district for which he was responsible.  Lincoln's response? He relieved Fremont of his command.  Why?  Fremont had embarrassed him politically. The members of Lincoln's own party wondered why Lincoln hadn't taken action on the slavery issue himself. Lincoln actually wasn't a very popular President in his day.

Carter had researched Lincoln's era before writing this novel, and was aware of how unpopular Lincoln had been.  That's why he imagined that if Lincoln had survived being shot by John Wilkes Booth, he might very well have been impeached.  When I saw that title for the first time, I also recognized it as a realistic possibility. 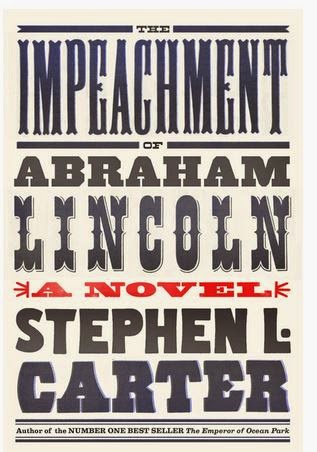 The central character of this speculative fiction actually wasn't Lincoln.  It was the fictional free African American  clerk  at the law firm in charge of Lincoln's defense.  Her name was Abigail Canner, and Lincoln was her hero.   She considered him the Great Emancipator.  As far as Abigail was concerned, Lincoln was the one who had brought about a new world for the members of her race.  And in that new world, Abigail could dream of becoming a lawyer.

Abigail is a courageous and determined idealist.  This is shown when one of the lawyers at the firm is murdered along with an African American woman named Rebecca.  Both the police and the remaining partner at the firm tell Abigail not to investigate these killings, but Abigail refuses to leave this case alone.   She wants justice for the victims, and she wants to discover the truth behind the murders.    She learned that truth and justice aren't very high priorities in the pragmatic realm of politicians.   Someone else might have become cynical and disillusioned, but Abigail maintained her values.

So this has good characterization, a suspenseful mystery sub-plot and politics that will remind readers of current events on Capitol Hill.   The Impeachment of Abraham Lincoln is truly a thought provoking alternate history that I recommend.