Is it Really True Love and Will Whatever it is Overcome All in Patricia O'Sullivan's A Notable Occupation? 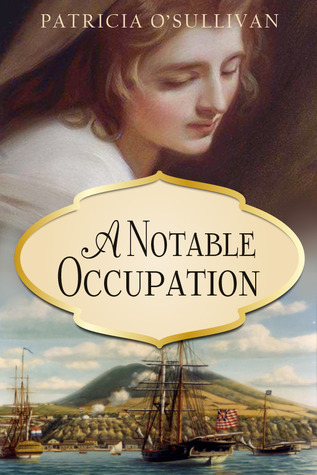 It occurred to me that God was cruel to create women with the ability to think and then to forbid it as sinful. Perhaps, in truth, God had made women for play acting. We could not help but think, but piety demanded we pretend not to.

Looking at this story based solely on its contents, I should have loved it. It's extremely detailed about what happened in  Newport during the Revolutionary war. This was interesting to me, as was the Jewish customs/ways/beliefs that were mentioned.

It has a strong heroine, strong in the sense that she overcomes a lot. The tragedies that befall her are never-ending to the point it's rather depressing. The loss of her mother, her father's abandoning her into the arms of a brutal man. Three miscarriages. Beatings. Lack of respect from her own husband, slaves (I normally take the side of slaves, but I didn't like these characters). Lack of respect from her own Jewish community. Separation from her spouse. Being held up on a ship and spoken to as if she's dirt just because she's Jewish... And she survives all this.

But I must confess, for a reason I find hard to pinpoint, I didn't like her.

I liked the hero even less. A British doctor who finds himself in America during the revolutionary war, he seems like a good fellow. But his attitude toward his wife stank. I persistently found myself doubting that he truly loved the heroine. I think he just wanted to marry a Jewish woman to tick off his father. When she is accused of being a spy, he jumps into bed with another woman and declares the heroine a dirty, greed Jewess. Is that how it's going to be every time she makes you mad? In the heat of anger...isn't that when our true feelings come out?

And this: She was unbelievably competent for a woman.

Another thing I hated about this book was the instant love. They were immediately in lurve with each other. Not even ten minutes went by, it seems. This was so eye-rolling.

Long review short: I abandoned this at 75%. I know, I know, to invest all that time reading...but I seriously wasn't enjoying this tale and didn't care at that point if the couple never saw each other again. It also has enough typos to make me frown.

I borrowed this on Prime.