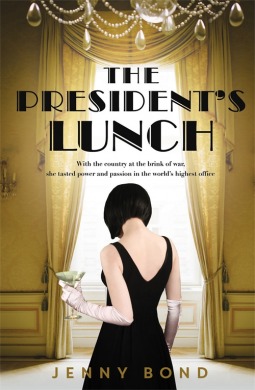 She was a symbol for the new administration, a representation of what every American trapped in gloom could expect to become. One by one people would be lifted from the doldrums, just as she had been.

Though fraught with fictional characters, real-life people come alive in this novel that takes us behind the scenes of the New Deal White House. It shows us President Roosevelt's ups and downs, his cockiness, his insecurities, his losses, his arguments with his wife, the larger-than-life Eleanor. Within the pages of this novel, we learn things we may not have heard before. Most everyone who has read about the Roosevelts knows of their affairs: FDR's Lucy and Missy and Eleanor's Hicks, but who knew that Eleanor purposely hired a crappy housekeeper and quite possibly "punished" her husband in this manner, ensuring he had tasteless meals his entire term.

And they, FDR and his wife, often disagreed on political issues. FDR was intent on America being isolationist--there's a reason for this too, a political campaign one--while Eleanor believed early on that Germany was getting out of hand and action should be taken...

I've always been a fan of Eleanor, so for me, she stole the show. I couldn't be happier with her characterization in this novel. As always, Eleanor is for the "little" people.

We also meet, briefly, a sickly Louis Howe. And I learned so much about the New Deal that I didn't know before. Sure, I could go read about it all on Wiki or something, but nothing beats learning about all this in a entertaining manner. It will stay in my mind this way. Example: Roosevelt is responsible for not only many of our bridges and roads, but also for electrifying the south.

But the heart and soul of the story is Iris, who guides us through the turmoil of the Great Depression as she struggles to feed and clothe herself and resorts to sleeping outside diners and begging for food and traveling the country via train, at each stop looking for opportunity where there is none. A former teacher, Iris isn't dumb. As Eleanor points out in the story, during an argument with FDR, the New Deal provides jobs for MEN, but not women.

A stroke of luck lands Iris in the White House, where she becomes engrossed in the lives of the Roosevelts, finds love and excitement with two different men, embroils herself in politics, and goes to law school, and becomes a member of the president's advisory crew.

I liked her*, but there was one thing I didn't like about her/the book. She cannot be alone. As she became more successful, she needed a "crutch" at all times, which was odd to me after she'd overcome so very much alone. She won't dump one man until another is lined up. I lost a lot of respect for her between the Monty and Sam thing. While I loved this book, I got so tired of Iris's back and forth and how she treated the men who adored her.

*I especially liked her when she stood up to a politician who mistook her for a secretary.

"I'm here to advise on constitutional matters. But I do know the housekeeper's extension if you would like to ogranise the fans."

I confess it jarred me at first every time it switched to the housekeeper's POV. I couldn't figure out why that was there, until I realized how the housekeeper was keeping us up to date and summarizing things that would have otherwise made the novel way too long. I also just plain liked her tone and came to look forward to these bits of narrative. The Author's Note in the end clarifies why this was there and made me appreciate it all the more.

Conclusion: I loved this book and truly felt I was in the White House watching not only Eleanor and FDR but also witnessing a rebirth of America as they brought her out of depression and reluctantly faced a new challenge: war.

I received this from the author in exchange for an honest review.

The President's Lunch can be purchased on Amazon.
Posted by Tara at 12:00 AM