Soaring Home Isn't Just a Book, But a Tribute to Early Aviation 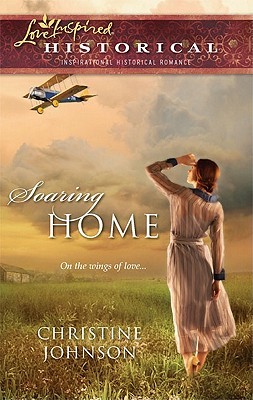 "I'm not meant to be here, in this small town. I want to do something, set a record, go places no woman has ever gone."

If you were to look at the aviation industry as if it were a human being, growing and aging like one, then Soaring Home takes us back to when aviation was just learning to toddle on its chubby little legs. WWI has just ended. Planes are up there, but they're solely for military use or very short flights--barn storming. Long distance hasn't been done yet, but the Wright brothers have done their thing and Glenn Curtiss is struggling to create what will be the aviation industry.

While we follow this spunky heroine, Darcy, as she learns to fly and dreams of making the transatlantic flight (as does the hero), the book name drops some of the most fascinating names in aviation history.

Glenn Curtiss has moved on from bicycle and motorcycle racing and is now manufacturing airplanes. One failed factory doesn't stop him. He opens another. This fascinating and amazing man is mentioned in the book because the hero, Jack, works for him, flies his planes--in the beginning. GC not only helped birth the aviation industry as we know it, but made the first long-distance flight in the States and created the Curtiss Aeroplane & Motor Company, commonly known now as Curtiss Wright. He's also famous for having created the Jenny, a common airplane flown by the Army during WWI. To list this man's accomplishments would take all day and not leave much space for the review of this book itself!

Something that stood out as interesting to me was that he taught women to fly, and this was when even the hero of the book balks at such a thing. Perhaps he even taught his own wife, as this photo from Wiki Commons rather attests to.

And brought to my attention for the first time ever, Marjorie Stinson is mentioned. After getting a license in the Wright school, she opened her own school in San Antonio, TX. (She was also the only women to be accepted into the U.S. Army Reserve Corps in 1915. She trained men for WWI and garnered the nickname 'The Flying Schoolmarm'.)

She recruited her sister Katherine as an instructor also. Katherine was only the fourth woman in America to receive a pilot's license. Her love of aviation was inspired by her ascent in a hot-air balloon. She not only was the first woman to perform in Japan and China, but also the first to fly for the U.S. Post Office.

Again, I could go on and on about these ladies, but I digress...I should also add that these people were merely mentioned, did not actually have roles in the story itself. The story itself is about Darcy and Jack--both fictional. Darcy wants to fly and Jack can teach her, but Darcy is constantly waylaid by her demanding family. (I really don't see why she should care for her sister's kids when it's her sister who keeps getting knocked up, but things were different back then.) Even Jack doesn't like the idea of women flying.

While I liked how persistent Darcy is, at the same time she also began to come across as nagging. Three-fourths into the story she began getting on my nerves. I felt like she was pushing Jack into the transatlantic flight, that it was all about her, not him achieving his dream, 'cause he didn't seem to want it as much as her. Do I understand it, her desire to make history? Yes, I do, very much, but at the same time it's obvious she's totally not prepared and has no patience. I can't get into too much detail about this without spoilers.

The book is filled with aviation stuff, from rudders to over-oiled engines, to the importance of NOT grabbing your yoke for balance, just all kinds of things as these two prepare for this transatlantic flight that may never happen...and at the same time they both resist their love for each other. Her because she knows he won't let his wife fly and she doesn't want to be under a man's thumb and he because he's just not the marrying type...

Though a Christian fiction, the book doesn't tend to be really religious. There's merely some spots here and there in which the heroine is upset that the hero doesn't go to church and in which it's thought that "God wants me to do this; God wants me to do that". Though only mentioned about three or four times, I didn't care for the anti-drinking message. For the millionth time, what is the deal with alcohol? Plenty of darned good people (who may even go to church!) enjoy a drink after a hard day's work...and they deserve it!

Wasn't too keen on the ending much at all.

I received this via Paperback Swap.