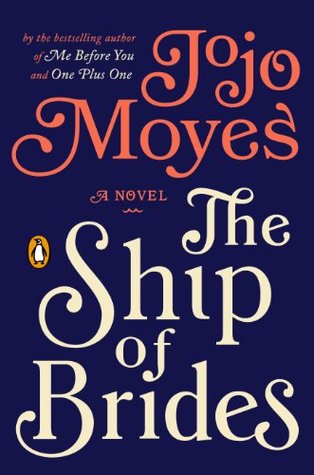 I'm a huge fan of Jojo Moyes and until now have never been on the fence with what to rate her work. This one is a tough one though. I liked half; I disliked half. I found myself impatient to know what happened in the end, to each and every one of the girls, yet at the same time, I found myself skimming the "man" parts--the captain's tale, Nicol's story, this guy and that guy. They bored me, and I didn't care about their lives.

This story doesn't really let the reader get to know the heroines, and there are four, at least not until the very end. It felt almost like each of the heroines was being held back from us, preventing the reader from being in anyone's head, heart, or experiencing their full range of emotions, and I prefer to be completely one with the character, so this method of not letting us know who these women really are until the last 15% doesn't work well for me.

But I was fascinated by the story itself, by the fact all these brides are shoved together on an aircraft carrier for six weeks, by the fact that the captain pushed aircraft overboard, appalled by the behavior of some drunken seamen, even more shocked at the unfortunate "Not Wanted Don't Comes". Can't imagine how embarrassing that is...

Even more mind boggling was the fact that many of these women on the ship were leaving everything (Australia) and everyone they'd ever known to go to a country (England) they'd never been before to be with men they'd married yet barely knew, and some of them are eight months pregnant and their husbands are about to lay eyes on women whom were young, thin beauties last they saw them..for their few days or weeks of marriage. It's crazy how rashly people acted during the war. And we see with some of these women that rashness comes back to bite them.

There was a lot of sadness in this story, as well as a lot of women overcoming all kinds of problems. My favorite character had to be Frances. She intrigued me the most though the book took too long to really let me "in there". In her story, we see how very quick people are to judge based on so little data and how important it is to know the full story.

And amid all the sadness, secrets, harassment, betrayals, and worrying who'll get the next "Not Wanted Don't Come", there are surprise bursts of humor, which in my opinion, kept this book afloat.

"Call that a storm? That was a piss and a fart in a teacup."

"Yes, sir. He had hold of her round the--round the back of the bilge pump."

So I liked some, didn't like some. Not my favorite by Moyes, but I still consider her a top-notch writer.