The Summer Queen: Eleanor Grows Into Her Power


My main motivation for wanting to read The Summer Queen by Elizabeth Chadwick was my interest in reading about Eleanor of Aquitaine on crusade in fiction.  There is a story that is apparently legend, rather than fact, that this queen led a troop of female knights on crusade to the Holy Land.  One article about Eleanor that contains this story is Female Hero: Eleanor of Aquitaine.    I was looking for a more realistic fictional version of this period in Eleanor’s life.  One reason why I gave a pass to Christy English’s novel about the early life of Eleanor of Aquitaine, To Be Queen, is that I read a review on Goodreads which stated that English’s novel glossed over the crusade. I am glad I chose Chadwick instead.  I downloaded The Summer Queen from Net Galley, and this is my review. 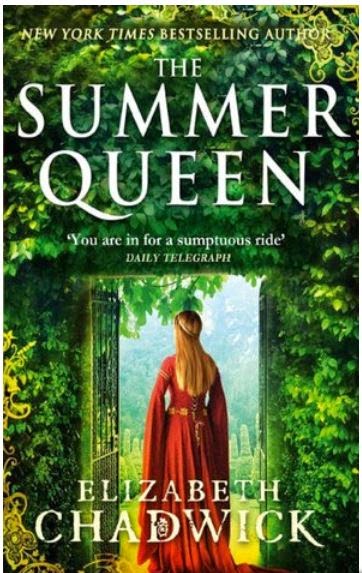 I hadn’t read any of Elizabeth Chadwick’s work since Daughters of the Grail, a novel dealing with the Cathars utilizing some   sources that Dan Brown later made famous in The Da Vinci Code. (For a scholarly approach to the Cathars see The Cathar Mary Magdalene and the Sacred Feminine) Yet I’ve received good reports of Chadwick’s scholarship since then.

The first thing I noticed when I began to read The Summer Queen demonstrated her interest in accuracy.  Chadwick used the medieval spelling of her central character’s name, Alienor. I hope readers will forgive me if I continue to use the familiar modern spelling in this review.  Another nice touch that showed Chadwick’s research was that when Eleanor sought an annulment of her first marriage, she prayed to St. Radegund, who established a monastery in Poitou and was buried there.   Eleanor was the Countess of Poitou in addition to being Duchess of Aquitaine.  It seems to me that Eleanor would have preferred a saint that was associated with the lands that belonged to her.

By the time I finished The Summer Queen I realized that character development in this book had been well-handled .  Eleanor’s first husband, Louis of France, could easily have been portrayed as a stereotype of medieval piety.  Chadwick gives him more depth by showing us the incidents that motivated him.  Louis is by no means admirable, but his attitudes are understandable given his history.  I hadn’t expected to like the young Henry of Anjou who would later become Henry II King of England, because I knew that he would later mistreat Eleanor.  Despite this foreknowledge, he managed to charm me as a reader while he was doing his best to captivate Eleanor.  He was such a contrast to Louis that it’s no wonder that Eleanor initially felt liberated by her second marriage.  This couldn’t last because Eleanor and Henry were strong personalities accustomed to wielding power.  It was inevitable that they would clash.  In the novel, Eleanor’s new mother in law, the Empress Mathilde, warns Eleanor of the fact that the men of her husband’s line are unwilling to share power.  Eleanor would end up finding this out the hard way.

The next two volumes of Chadwick’s trilogy deal with territory that is more familiar to me, but I confess to wanting to experience Eleanor’s novelistic perspective on Becket’s murder in the cathedral. So perhaps I will be visiting with Chadwick’s version of Eleanor in the future.