Tara: Welcome. You’re here to promote RIPTIDE, a Sam McRae mystery. Tell me, please, what was the inspiration behind this series? How did it come to you? 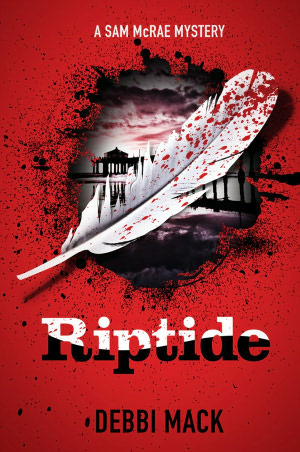 Stephanie Ann “Sam” McRae’s stay in Ocean City for the annual Maryland bar association convention turns into a busman's holiday when her best friend Jamila is arrested for a murder she didn’t commit. All signs point to a frame, but Jamila’s local counsel must plea bargain, placing a permanent stain on the ambitious attorney’s spotless record, unless Sam and the private investigator on the case find evidence to clear her. Sam has her work cut out for her, given that the victim is the stepson of a local wealthy entrepreneur and poultry producer and no one will talk to her, including the investigator hired on the case. Even Jamila appears to be withholding information. Meanwhile, Sam's running from mysterious pursuers and comes under police scrutiny when another murder takes place.

With the clock ticking down to the convention and preliminary hearing, Sam must uncover secrets, lies, and fraud to find the real killer. At what cost will that knowledge come for Sam?

Debbi: The Sam McRae mystery series was inspired to a great extent by my experiences as a practicing attorney. I’d always wanted to write a private eye novel. However, by the time I started my first novel, I wanted to find a way to distinguish my protagonist from other hard-boiled female detectives. It seemed logical to use what I knew, so I chose to write about a female lawyer/sleuth, who solves mysteries related to her cases.

Tara: I love that you were a lawyer. We need more women in law. I'd love for you to share some stories about that one of these days.

We focus a lot on heroines here on Book Babe. Tell me what makes your heroine(s) strong.

Debbi: Stephanie Ann “Sam” McRae is staunch defender of the underdog. Initially, she lived in Bed-Stuy in Brooklyn, a ghetto at the time. She was orphaned at the age of nine and moved in with her cousin in Maryland afterward. So Sam is no stranger to the system or life’s misfortunes. She can be a bit sarcastic, but she’s basically a softie for people in need.

Debbi: Only to a certain extent. I think writers put a little of themselves in all the characters they create. Sam is like me in questioning authority. However, unlike me, Sam puts up with a lot of really horrible stuff and keeps going, anyway.
Tara: What kind of research did you do when you penned this novel? Did anything surprising come up in your search?

Debbi: The research I did for RIPTIDE confirmed much of what I suspected about the poultry industry on Maryland’s Eastern Shore. I also researched the history of race relations there, and was surprised at how segregated that area of Maryland was, as recently as the late 1960s.

Tara: Poultry? That's a surprising answer. And I have to agree with you. It's surprising how long segregation went on.

What would you like readers to gain from reading your book? Is there a strong moral? Do you hope they will laugh, learn something, ponder a point?

Debbi: One of the themes running through the book is the importance of friendship. Sam has to figure out a way to exonerate her best friend, Jamila, of a murder she didn’t commit. The fact that Jamila is black and both of them are from out-of-town makes her job difficult. Jamila is also holding back information that could complicate the case. Eventually, Sam almost has to wring the truth from her friend.

The other themes include race relations on the Eastern Shore, small-town corruption, and the poultry industry’s practices vis-a-vis hiring illegal aliens, animal abuse, ecologically unsound farming practices, and related issues.
Tara: Now let’s talk about your hero. What draws the heroine to him? Is he based on a real man in your life by any chance?

Debbi: There isn’t a prominent hero in this book. However, Sam does end up relying upon a male private eye, who lends her aid in finding information. He’s a continuing character in the series, who seems to want to be more than friends with Sam. However, because Sam is wary of mixing business and pleasure, she has resisted the temptation to get deeply involved with him over the course of four novels.

Nonetheless, she is drawn to him, because he’s been a good friend, is smart and capable, and treats her with respect. This has created more sexual tension between them as the series has progressed.The private eye isn’t based upon anyone I know. He’s an amalgam of what I see as ideal traits in a man for someone like Sam.

Tara: I really like that answer. It's always refreshing to discover a book in which the heroine doesn't really need a man or isn't hanging all over or pinin for one. LOL

Your book takes place in Ocean City, MD. If I were a tourist, what would you recommend I see in this town/country?

Debbi: If you go to Ocean City, be sure to hit the boardwalk and stop by Thrasher’s for French fries. If you’re into ice cream, Dumser’s Dairy has the best ice cream and sundaes in that area.

From Ocean City, it’s a quick drive to Assateague Island, where you can see the wild ponies, take nature walks or camp on the beach.

Also, if you’re into shopping, there are outlet malls up the Coastal Highway in Delaware. There is no sales tax in Delaware, which makes the outlets a popular destination.

Tara: Oh, I'm very into shopping!! LOL Thanks for the tip.

A more personal question. What’s the one thing you hope to accomplish before you die? Your main goal?

To travel to as many places as I can. Especially outside the U.S. My dream would be to travel around the world and write about it. However, seeing all 50 states would be pretty awesome.

Debbi: We have three cats at this point. I love cats. Two of them, Marnie and Tweek, are brother and sister. Marnie looks a bit like a tortie crossed with a Siamese. Tweek is all black. The third is named Moze, and he’s a black-and-white domestic cat.

I’ve made a video called “Meet Our Cats”

Debbi, thanks so much for sharing that with us. I wish you the best of luck with your series. Do keep us posted.

Readers, you can nab her book for yourselves...