Tara: Welcome. You’re here to promote The Spider and the Stone, a historical novel set during the 14th-century Scottish wars for independence. Tell me, please, what was the inspiration behind this story? How did it come to you? 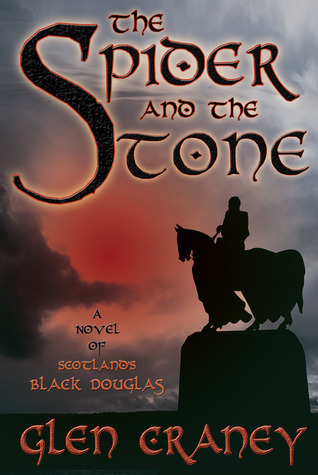 As the 14th century dawns, Scotland’s survival hangs by a spider’s thread. While the Scot clans scrap over their empty throne, the brutal Edward Longshanks of England invades the weakened northern kingdom, scheming to annex it to his realm.

But one frail, dark-skinned lad stands in the Plantagenet monarch’s path.

The beleaguered Scots cherish him as their "Good Sir James." In England, his slashing raids deep into Yorkshire and Northumbria wreak such terror that he is branded the Black Douglas with a reward placed on his head.

As a boy, James falls in love with the ravishing Isabelle MacDuff, whose clan for centuries has inaugurated Scottish monarchs on the hallowed Stone of Destiny. But his world is upturned when he befriends
Robert Bruce, a bitter enemy of the MacDuffs. Forced to choose between love and clan loyalty, James and Isabelle make fateful decisions that will draw the opposing armies to the bloody field of Bannockburn.

Isabelle will crown a king. James will carry a king's heart. Both now take their rightful places with Robert Bruce, Rob Roy, and William Wallace in the pantheon of Scot heroes.

Here is the story of Scotland’s War of Independence and the remarkable events that followed the execution of Wallace, whose legend was portrayed in the movie Braveheart. This thrilling epic leads us to the miraculous Stone of Destiny, to the famous Spider in the Cave, to the excommunicated Knights Templar, to the suppressed Culdee Church, and to the unprecedented Declaration of Arbroath, the stirring oath document that inspired the American Declaration of Independence four hundred years later.

The Spider and the Stone is the unforgettable saga of the star-crossed love, religious intrigue, and heroic sacrifice that saved Scotland during its time of greatest peril.
Glen: I often receive inspiration for my books in dreams. About ten years ago, I awoke from a vivid dream in which I was a mounted knight fighting a duel near a stream with a black-robed hag armed with a sickle. The scene then shifted to a photograph of me standing with six other knights around a seated monarch in celebration. A caption read: "Americans aid the King at Bannockburn."

The next morning, I launched my quest to decipher the meaning of this strange dream. Soon I was in Scotland, walking the fields below Stirling and following the famous burn of Bannock. Two weeks later, I boarded the plane for home accompanied by two main characters: Sir James Douglas, King Robert Bruce’s comrade in arms, and Isabelle MacDuff, the Countess of Buchan, who turned against her clan to crown the Bruce.


Tara: We focus a lot on heroines here on Book Babe. Tell me what makes your heroine strong.

Glen: Isabelle MacDuff paid a terrible price for helping Bruce gain the throne. England's King Edward I ordered her captured and hung for years in a cage atop Berwick Castle. It remains a mystery why she risked so much for the Bruce. English chroniclers at the time suspected she was one of his secret mistresses, but I found a clue for another possible motive. History has given short shrift to the role that Scot women played in the Bruce's success. I hope Spider helps corrects that injustice.


Tara: Did any particular woman in your family or life help inspire some of her traits?

Glen: None among family or friends, but the heroine in my first novel, The Fire and the Light, was very much like Isabelle. In the 13th century, Esclarmonde de Foix, a Cathar viscountess, challenged Pope Innocent III and his legates during the Albigensian Crusade. Isabelle and Esclarmonde were both prominent noblewomen who defied powerful men and paid dearly for their convictions.

Tara: I'm going to have to look that book up!

Glen: With novels set during war, there's always the treacherous line between maintaining authenticity and not lingering in describing the bloodlust and carnage of those times. Execution and assassination scenes are particularly tricky, too. I try to portray these in a way that leaves the reader emotionally moved, but not revolted.

Tara: That's a good answer. I've never thought of that being a writing challenge, but now that you mention it, you are right. When reading war stories, sometimes I've noticed it goes a bit too far for me.

Glen: I pore over the histories and biographies, but what I really enjoy is traveling to the sites. The gnomes and kelpies accompanied me on my research trips to Scotland, playing a trick or two along the way. At the ruins of Castle Douglas, I was welcomed with a bouquet of roses left on the ground in the shape of a crown. On Arran isle, I whimsically asked for a sign to confirm the location where, legend has it, Robert Bruce saw his famous dangling spider. When I reached the grotto known as the King's Cave, a spider sat ensconced in the web spun across the gate. Days later, I downloaded my photo of the cave's entrance, and the spider was missing. The veil separating the realms is very thin in the lands of the Celts.

Glen: The moral may have been embedded in that triggering dream I had years ago. The caption "Americans Aid the King at Bannockburn" at first seemed nonsensical to me. But I learned that, after their victory against the English, Robert Bruce and his nobles affixed seals to the Declaration of Arbroath, affirming their independence and warning the pope to cease meddling in their affairs. Nearly five hundred years later, the founding fathers of the United States--many of Scot heritage--signed a similar declaration. I came to understand that an unbroken thread runs from Bannockburn to Yorktown. Scotland and the United States are sister nations whose destinies have long been spiritually conjoined.

Tara: If I were a tourist, what would you recommend I see in Scotland?
Glen: There are so many haunting sites from the Bruce era. Stirling Castle still stands, but unfortunately the nearby battlefield of Bannockburn has been significantly altered over the centuries. One can still stand atop Moot Hill at Scone, where Isabelle crowned the Bruce, and climb the ruins of Berwick Castle overlooking the River Tweed, where she suffered imprisonment. If I had to choose one place that captures the true spirit of Scotland, it would be Iona, the holy isle in the Hebrides where many of the ancient kings are buried.

Tara: Moving on to personal things...if you could time travel to any time and place in history, where and when would you go and what is it that draws you to this time period? What would you do whilst there?

Glen: I'm not much of a romantic when it comes to historical eras. Life was so brutal and disease so rampant that I don't know why anyone would want to trade our existence with that of another time period. But if I could be dropped in for a quick interview, I'd opt for a 60 Minutes exclusive with Jesus of Nazareth and Mary Magdalen on the night of the Last Supper.
Tara: What’s the one thing you hope to accomplish before you die? Your main goal?

Glen: I'll be satisfied if my books encourage readers to approach traditional historical accounts with a questioning eye. Rep. Michelle Bauchmann has said she went into politics after being outraged by the "snotty" attitude that Gore Vidal showed to the founding fathers in his novel, Burr. Surely Vidal greeted that revelation with one of his wry grins and a champagne toast. If a historical novelist can irk the powers-that-be, give voice to those wrongly silenced in the past, and rattle a few rusty cages in the process, then I'm confident the angels will be served.

Glen: Growing up on a farm, I had several dogs as a boy. But I travel so much now that it's not practical to keep one. My favorite, appropriately, was a Scottish terrier who would spin in circles until he made himself dizzy. He was just another crazy Scot, I guess.

About the author: Glen Craney is a novelist, screenwriter, journalist, and lawyer. A three-time finalist for Foreword Reviews Book-of-the-Year Award, his historical fiction has taken readers to Occitania during the Albigensian Crusade, to the Scotland of Robert Bruce, to Portugal during the Age of Discovery, to the trenches of France during World War I, and to the American Hoovervilles of the Great Depression. More about his writing can be found atwww.glencraney.com.


Excerpt download link for The Spider and the Stone.