A Better World by Marcus Sakey: Great Characters Hanging From A Cliff #Giveaway

A Better World is the second volume in The Brilliance Saga by Marcus Sakey.  Although I haven't read the first book, I felt that this novel included enough background so that it could stand on its own.  I never felt lost.  The concept, the plot and the motivations of the characters were all understandable to me.    I received an ARC of A Better World through the publisher via Net Galley in return for an honest review. 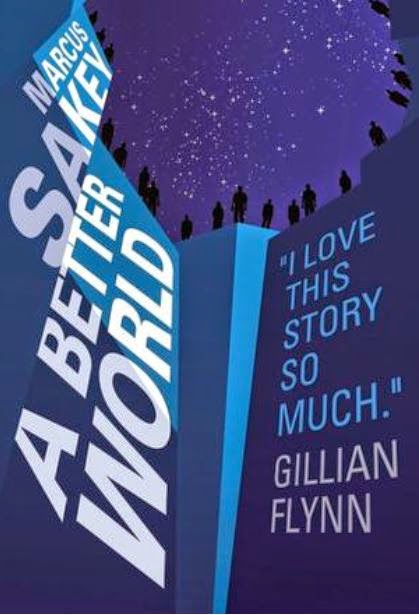 A Better World is a science fiction novel with a strong thriller vibe.  Covert agents are very central to the novel including the protagonist, Nick Cooper.  When the book opens, he is employed by a fictional covert agency in the United States called the Department of Analysis and Response (DAR).  In some respects, Nick is an old fashioned thriller hero.  He loves his country and he wants to save the world.  Yet unlike James Bond, he is also a family man and his family is very important to him.   He is also a more complex thriller hero who is introspective.  His introspection actually isn't portrayed as a weakness.  Since he is capable of evaluating his own performance, he can avoid repeating any errors that he has made so that his next action will be more likely to accomplish his goals. I considered him a strong and sympathetic hero.

The science fiction aspect involves mutated humans called Brilliants with paranormal powers.   It invites comparison to Marvel's X Men.  Certainly the Brilliant leader, John Smith, has attitudes similar to those of Magneto.   Both were victims of the inhumanity of  unmutated humans when they were younger which caused them to develop tremendous resentment toward the ungifted.  Yet I feel that Magneto was a sympathetic anti-hero, but that Marcus Sakey's character John Smith is  thoroughly villainous and lacking in dimension.  Perhaps it's because I read and was impressed by  X Men: Magneto Testament  which depicts his experiences as a Jew in the Holocaust.  Sakey didn't give us an equally powerful flashback to John Smith's past experiences in Hawkesdown Academy.    I concede that the Academy system is shown to be an awful one, but I wanted to see how it personally impacted the young John Smith, so that he could be more real to me.   Nick Cooper is also a Brilliant, by the way, but he felt like a deeper character.

The female Brilliant character, Shannon, wasn't particularly complex, but she pleased me anyway because she is independent, resourceful, turned out to have excellent judgment and has a very cool paranormal gift.   Perhaps other Book Babe readers will feel the same way about her.

Yet despite the fact that I liked some of the characters, I have a longstanding dislike of  cliffhangers. I have always believed that the central conflict of a novel's plot should be resolved within that novel.  A series should not be a single book chopped into parts.  They should tell different stories about the characters or stories which take place in the same milieu.  I think that cliffhangers are manipulative and that they seem to display a lack of confidence in the strength of the work.  Does the author or publisher actually think that readers would be less interested in a new story about Brilliants?  Regardless, I personally prefer fiction that is fully resolved.  If it had been a completed novel, I would have given A Better World one more bike.

Tara here...so what'd you all think of Shomeret's review? Are you a fan of this series and hoping to acquire book two? Here's your chance! Shortly after Shomeret scheduled this review, a brand new paperback copy of this title landed on my doorstep with a note saying this copy was to do with as I pleased. And I've decided to share it with you book babes. See the Rafflecopter below to found out how this book can be yours. And everyone, take a moment to comment on Shomeret's review, show her some Book Babe love!