Our June joint review deals with Towers of Tuscany by Carol M. Cram.  This is mostly a historical novel that takes place in medeival Italy.  It deals with a woman who struggles to be a painter in a society where the odds are against her. There is also a contemporary story line about an art collector who rediscovers a painting by this fictional woman painter. 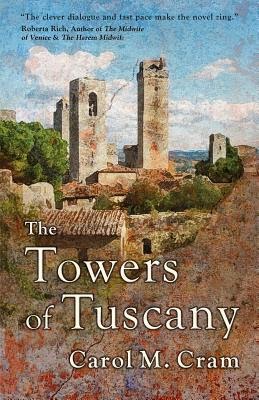 Shomeret has read a number of books like this, but has a tremendous affection for this sort of book.  She read it in April and posted her impressions first.  Tara joins the conversation with her impressions.

Shomeret: The central character, Sofia, learned painting from her father and assumes that her husband will support her career as a painter.  I found this assumption rather naive, but Sofia is  young when she decides to marry.  Yet I think that she continues to have poor judgment throughout the novel.  Tara, what do you think of Sofia?  I finished the novel thinking that I wasn't sure whether I liked her or not.  Her best choices were ones that allowed her art to flourish, but she often didn't make the right ones.  I found myself asking what she was thinking a number of times.

Tara: I hated her. Loathed her. Wanted to murder her. LOL. You know I like a strong woman...and at times I felt Sofia was brave, namely when she leaves a life of comfort to dress as a boy and pursue her passion: painting. I admired that about her...but she has an arrogance and the way she treats others...as though she's granting them a huge favor by permitting them to be in presence, really rubbed me wrong.

Sofia scowled as she thought of how she would scold him when she found him. He should have known better. She would allow him to stay with her...

And I realize a painter, an artist of any type, must have confidence, but from her, it was too much. She also has HORRID taste in men. Just as I was beginning to earn respect for her, when she left Giorgio, she falls for a total--pardon me--douche bag of a man. And that is when she gets incredibly stupid and throws everything away and I wanted to murder her. WHY does man must always be a woman's downfall? Aren't we stronger than that?

Shomeret:  I agree with you about Sofia's choices of men, but not all women do make the wrong choices.  A woman in the medieval period who wants to paint and has  disguised herself as a man in order to do so, should realize that falling in love is counterproductive.  I have read other novels about medieval and renaissance female painters who disguised themselves as boys and successfully maintained their male identities and their painting careers.  There is also an apocryphal story about a painter named Onorata Rodiani. The link accesses a Wikipedia article about her.  She was sexually molested while painting a mural.  She killed the rapist.   After her rape, she disguised herself as a man and became a mercenary.  I read a version of her story that  said that she continued to paint as a soldier and that she eventually commanded an army of mercenaries.  Unfortunately, there is no evidence that Onorata Rodiani ever existed, but I consider her story an inspiring survivor tale.  Sofia, unfortunately, is no Onorata  Rodiani.

The discussion guide at the back of the book says that its' theme is that "the creative impulse survives".  It seems to me that the creative impulse belongs to individual artists who don't survive.  I've tended to believe that the art survives, but this book shows me that whether it survives can depend on the vagaries of collectors' taste and the art market.   What do you think about this book's message?

Tara: I didn't get the impression that was this story's message, though I agree with you regarding art. The creative impulse of that particular person dies with them, but their art lives forever, and if they played their cards right, their reputation. I look at art and I wonder at the person who created it, how they felt when they did, what their story is. But as for the book's message, I strongly believe it was about men being women's downfall. KEEP YOUR LEGS CLOSED. *smh* I think the message you saw could have been stronger if there had been more of the contemporary storyline. Instead, that bit didn't appear until the last 5% and at that point, I'd had enough of it, of Sofia, of the story in general.

And holy crap. Some talented author needs to write a historical novel about that Onorata Rodiani you mentioned above. I'd be all over that. Excellent find, Shomeret.

Shomeret:  I  discovered Onorata Rodiani many years ago.  She's one of my obsessions.  Perhaps one day I'll write that novel, if no one else does.

In response to your comments about the theme of Towers of Tuscany, I'm not sure that "keep your legs closed" is the message.  Sofia ends up having an artistic legacy despite her foolishness.  I think that's what is meant by the creative impulse surviving.  It survives in other people who are inspired by the work of dead artists.

This book also asks whether it's right for a woman to prioritize art over marriage and family.  Today, we think that a woman can have both, but that wasn't the case in earlier eras.  Most women had to choose between having children and having a career.  I know that my own mother who married in the 1950's didn't think  she could be an artist and a mother, and neither did my father.  So my mother faced the same dilemma as Sofia centuries later.  She felt she had to choose marriage and family over art.  I wish that my mother had felt stronger, but historically it was very hard for a woman to go against her family and society in general in order to pursue a vocation.  Do you feel that women like Sofia  should have been stronger and not cared about what other people thought about them?

Tara: That's a good question. I think...in Sofia's time, it would have been hard. I mean, upon discovery, these women dressed as boys, were whipped through the streets. That's a pretty harsh punishment. I'm not sure even I would risk that. But I feel that Sofia very nearly had it all...and threw it away. So yes, she could have been stronger, at least where it came to weakness of the flesh and her vanity. In a way, I suppose women in general are still battling that. So many women are so quick to throw everything away for a man. I'd rather be with someone than nobody at all....UGH. As you can see, that's what I really took from this book. I know I sound like a broken record...but...

As for the writing itself, Shomeret, what did you think of the flashbacks? I felt at times they provided great insight into Sofia's personality and especially her relationship with her father. At other times they felt unnecessary. But I did get a laugh from some of the things her father said. I guess what I'm saying is, I'm on the fence with the flashbacks. Perhaps they could have been cut back.

Shomeret: I also think that the flashbacks could have been cut back.  I got very little from some of them.

Tara: My favorite funny line from her dad: "A healthy sow gives birth to dozens of piglets. That doesn't make the sow any less of a pig herself."

And the painting details...I found the poisonous aspect and all the grinding of things to make "paint" very interesting, but there got to be too much of it after a while. I mean, I'm not going to remember all that, you know?

Shomeret:  I liked the painting details.  I am a fan of novels about painters and I'm fascinated by the different techniques that painters use.  I never formally studied art history, but I feel that I'm educating myself in art history through reading historical fiction about artists.  This particular novel did teach me a few things about art and artists during this period, so it did have some value for me.

Tara: In conclusion, I hated this heroine and her personality and her choices so much, I didn't enjoy the book. Though I must give the author credit for not going with the traditional cheesy HEA ending. It was realistic.

Shomeret:  Well, I don't think that this book was ever intended to be a romance which is demonstrated by the lack of HEA.   The events in Sophia's life are intended to give us insight into the period. Although I did like some things about this book,  I have to admit that I have read better books that take place in medieval Italy, and better books dealing with women who were artists.