City of Darkness and Light: A Tale of Two Dangerous Cities

Molly Murphy is the kind of heroine known as "spunky". She is the protagonist of a mystery series written by Rhys Bowen.  I decided I liked Molly when I read the first book in the series, Murphy's Law which deals with her immigration to the U.S. from Ireland.  Molly is a private investigator in turn of the 20th century New York.  Her first case, which precipitated her career, dealt with murder on Ellis Island.  In her most recent adventure, Molly is in Paris wondering whether it's a more dangerous city than New York.  She had come to stay with friends and found them missing when she arrived in Paris, and an American painter had been murdered.  Paris is known as the City of Light, but Rhys Bowen has re-named it City of Darkness and Light in the title of this novel. 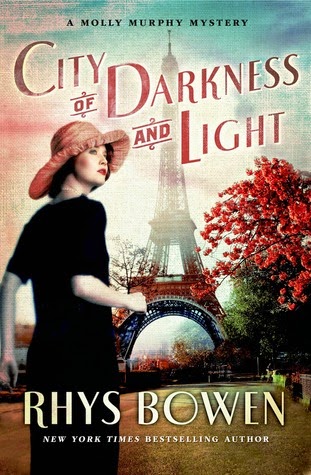 At this point in the series, Molly has married.  Her husband, NYPD police captain Daniel Sullivan is no supporter of women having careers, and has decided that Molly must give up hers.  So far he has had no success in stopping Molly from investigating murders.  Why would Molly marry a man with such an attitude in the first place?  Well, they bonded over co-investigations before their marriage, and he does care about her.  He actually shipped her off to Paris because he feared for her safety in New York.  The situation in New York had become quite alarming.  I can only imagine his dismay if he'd learned at the time that Molly had landed in trouble in the place where he believed she'd be out of harm's way.

While she's in Paris, Molly does get to enjoy the art world.  She meets Picasso, Gertrude Stein and Mary Cassatt.  Mary Cassatt is actually a pivotal character in the plot.  Rhys Bowen portrays this American artist, who is often considered a sentimental painter of mothers and babies, as an outspoken feminist.    When I researched her for this review, I found a number of articles re-evaluating her work and the Mary Cassatt Article on Wikipedia   calls her a  "feminist from an early age".   I was delighted to learn more about her as a result of reading and reviewing this book.

Another aspect of this book is an upsurge of anti-semitism that surfaced as a result of the Dreyfus Affair.  A Jewish military officer named Alfred Dreyfus had been falsely accused of treason. A review on Goodreads said that Rhys Bowen gave the false impression that the controversy over Dreyfus had only just begun in 1905 when the book was taking place. I don't feel that Bowen did mislead readers.  France was deeply divided throughout that period.  I have read another mystery that took place at that time which focuses more centrally on the ongoing impact of the Dreyfus Affair called The Blood of Lorraine by Barbara Pope.

My feeling is that this is a colorful and exciting novel that provides Molly Murphy with a new milieu and new challenges.  She rises to the occasion, and it becomes increasingly evident that Molly is never going to be a stay at home wife.