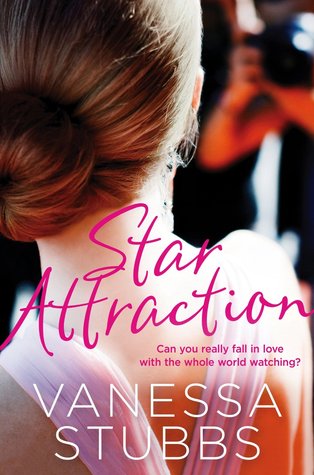 Tara: Welcome. You’re here to promote Star Attraction, a chick-lit book. Tell me, please, what was the inspiration behind this story (or series)? How did it come to you?

He's the most famous and most desired man in the world.

She's a hard-news journalist trying to keep her job.

When Sydney girl Madison Edwards is sent to interview Hollywood heartthrob Jamie Hall, as far as she's concerned it's an embarrassing blot on her credibility. As far as Jamie is concerned, Madison is just one of the thousands of people who want a piece of him. They both turn out to be wrong.

When an unimaginable attraction develops between them, they're momentarily blinded. Could it be true love or just the glare of the paparazzi's flashbulbs?

This stellar debut is a deliciously seductive story of our times, about celebrity and stardom – and about finding something real and true, even when the whole world is watching.

Vanessa: I did that rather predictable thing of writing from experience. Fortunately I had a lot of interesting material from my years of being a journalist. My novel is about a reporter who’s sent to interview a huge movie star. I’ve been doing celebrity interviews for many years and always thought it would make a good novel. It’ s just such an unnatural experience. You’ve got about eight minutes to try to get something interesting out of this star when they’ve interviewed 30 other journalists before you. I wondered what it might be like to have a journalist who wasn’t at all fawning or star struck and a movie star who was totally over being the biggest thing on the planet and put them in a room together for eight minutes and see what happened. That was the kernel of my idea and then the rest of it kind of made itself known as I wrote.

Tara: We focus a lot on heroines here on Book Babe. Tell me what makes your heroine(s) strong.

Vanessa: I was really only ever going to write a strong heroine. Madison has a lot of faults and in a way her strength is somewhat projected – she’s this very smart political journalist who is breaking amazing stories and wants to change the world. But underneath the suit and the intellect she’s vulnerable and a bit neurotic. I mean, if you dig deep enough into anyone you find their weakness. But the thing that makes her strong is that she has to really dig deep when confronted with big choices. She has to actually face her demons and decide if she can let herself be open to love. She’s so invested in her career and success (which looks strong on the outside) but she’s lonely. Falling in love is a big risk, a big gamble and I think that takes strength. She also calls things as she sees them and she’s very honest and authentic. I really love this in a person and it’s a great strength to have.

Vanessa: Yes and no. Madison is much more outwardly ballsy than I am. She’s more ambitious and much less flighty than me. I’m an emotional creative whereas she’s much more analytical and probably smarter than me! She’s the person I wish I could be sometimes. But all the self-doubt that she harbours under her polished exterior is a part of me. Also, I’m not really one to get star struck over celebrities. I think I see celebrity interviews as a more anthropological exercise – really weird and fascinating than sitting there being in awe/love with Hugh Jackman or Daniel Craig.

Vanessa: I think her authenticity is the most sexy thing about her and it’s the thing that Jamie, my hero falls for. She’s so honest, sometimes to the point of being a little rude. I find this refreshing – not needing to please just to be liked but instead being true to herself. She’s also very ambitious in her job and that’s kind of sexy. She wants to make a difference and she sees the big picture.

Tara: I find ambition very sexy. Kudos to her! What kind of research did you do when you penned this novel? Did anything surprising come up in your search?

Vanessa: I didn’t do a huge amount. A lot of it was pulled from my own experiences as a journalist. But I did have to research L.A. a bit as I’ve only been there once. I looked at a lot of pictures of movie star’s houses in order to get a picture of where Jamie lived. I guess it surprised me just how rich these people are and how many properties they own. I also have a scene in the book where Jamie is interviewed by an American TV host, like a Letterman kind of thing. I watched Robert Pattison interviewed on a few of those big talk shows to get a real sense of how it goes down. Watching his body language I was surprised at how nervous and ill at ease he appeared despite being a huge movie star in the middle of the Twilight series.

Tara: What would you like readers to gain from reading your book? Is there a strong moral? Do you hope they will laugh, learn something, ponder a point?

Vanessa: I think this is the point of stories. At the end we must have learnt or pondered something and hopefully done a bit of laughing and tearing up, too. As an author sometimes it’s only after you’ve finished writing that you realise what you were trying to say. A lot of reviews have said my book is much deeper and more thought provoking than they’d been expecting given the title and the cover. This is one of the best compliments. I’d like to think that readers will think about the stighly warped nature of celebrity and the way in which the world seems so attuned to the hording of material possessions. They are two great markers of success in our society. But are these the things that really equate to happiness?

Tara: Actually, I've read a lot of books that did nothing and had next to nothing. No moral, no point, no laughter... LOL Not all stories seem to have a point. But let’s talk about your hero. What draws the heroine to him? Is he based on a real man in your life by any chance?

Vanessa: I think Jamie is an amalgamation of some of the celebrities I’ve interviewed and possibly my husband! (I guess that’s not so surprising given that he’s the man I’ve known best in my life!) I wanted my hero to be emotionally intelligent but also typically male and so sometimes not so emotionally intelligent. I often asked my husband for advice over how a guy might act in a certain scenario. Jamie is flawed – he uses the power of his celebrity to bed women (note - not based on husband’s experience!) but he’s empty. Madison is certainly not at all drawn to him at first as she sees the power he wields and his big ego. But while he does have those things, he’s also a softie. He’s at a place in his life where he wants something real and true to cut through all the BS that comes with being a star. He’s very intelligent and that’s where their first connection happens.
Tara: I'm chuckling at the "not based on husband's experience". I'm glad to hear that. LOL Your book takes place in Sydney and Los Angeles. If I were a tourist, what would you recommend I see in this town/country?

Vanessa: Well, a lot of my book happens in and around expensive hotels in Sydney, as that’s where movie stars are forced to hole up. There’s a scene at Bondi when Jamie gets mobbed. But Madison wishes she could take Jamie away from the crowds and get a ferry to Manly beach for fish and chips. That would be my ideal for a tourist or a date.

Tara: A more personal question. What’s the one thing you hope to accomplish before you die? Your main goal?

Vanessa: Wow. Big question. This is going to sound completely soppy but I do dabble in romance, so please excuse me! I think when everything is done and dusted, it all comes back to love. Learning how to give it, receive it, nourish it. And that includes all kind of relationships; friendships and familial love. Putting those you love first. If you think about the times you’re happiest, it’s usually when you’re surrounded by people you love.


I also think that everyone has a talent they’ve been given. It might be sailing boats or sewing or drawing or numbers. For me it feels like it’s writing and telling stories and so I feel like if you’ve been given that, you need to find a way to use it and honour it.

Tara: What an excellent answer and food for thought!

Vanessa: I’m afraid I only have two fighting fish called Coral and Sabrina. They have had a tempestuous relationship trying to kill each other from opposite sides of the fish bowl but I think they’ve finally found a way to live in happy harmony…quite like most romances, really.

Tara: I've had a series of those fish!!! Even the males try to kill the females. LOL. I had to separate them. Talk about interesting mating habits...

Congratulations on your book and good luck. Readers, the buy link is below.