Please welcome the author of the Agency of Burglary & Theft Series, a series featuring a lady thief...and not the petty sort... I read book one last year. Check out my review here.

Being good is totally overrated.

Popular culture is full of anti-heroes—from Jay Gatsby to Dexter—protagonists who are layered, complicated, flawed. They fascinate us with their contradictory brew of good and bad qualities.

But what about anti-heroines? For whatever reason (and I suspect there are many), we just don’t see as many anti-heroines as anti-heroes. Is society ready for the rise of the anti-heroine—women who are nuanced, conflicted, and not entirely...good?

My fascination with anti-heroines goes back many years. It was the height of the chick-lit era and I found myself reading a lot of books with well-intentioned heroines who got themselves into various scrapes and misadventures. At first these stories were funny and diverting, but I soon began finding them, well, tiresome. It thought: how cool would it be to read about someone whose intentions were not so honorable? I wrote a short story about a girl pirate—a young girl with larceny in her blood. It won 2nd place in the Writer’s Digest Annual Competition. For unpublished writers, this is a biggie—there were 17,000 entries that year. Validating? You bet. But it was just the start.

I then wrote my first novel, A Beautiful Heist, which was published in 2013 by Kensington, and now the sequel, A Magnificent Crime, which has just been released. My protagonist is a professional jewel thief—a young woman who has friends, love interests, the trappings of a normal life...she just happens to be a career criminal.

Clearly, I have a thing for anti-heroines. Whether they’re tough, ambitious, unforgiving, or morally ambiguous, there’s something compelling about a complicated heroine with shades of good and bad—not quite the villain, but certainly not the damsel-in-distress, either.

Here are some of my favorite anti-heroines:

1. Becky Sharp in Vanity Fair.
Thackeray’s famous anti-heroine is a fascinating character: an ambitious social climber who uses her cunning and her charms to get what she wants. Vanity Fair was first published in 1847—proof that the anti-heroine is not a modern construct.

2. Scarlett O’Hara in Gone With The Wind.
Scarlett is vain, spoiled, and self-centered—but she possesses an iron determination to survive. Terrible things happen to her, but she stays strong. Even if you don’t love Scarlett, how can you not admire her?

3. Bonnie Parker in Bonnie & Clyde.
Bonnie wasn’t a character at all, of course, but a real woman. The 1967 film starting Faye Dunaway and Warren Beatty allowed us to imagine what she might have been like—and the results were fascinating. The character of Bonnie was a criminal, a bank robber, ruthless and morally off-center, but daring and full of life. Is that why we found ourselves rooting for her?

Gregory Maguire wrote a story about The Wicked Witch of the West—but made her the protagonist, not the villain. It’s such a fabulous idea, I can't help but feel a little envious that I didn't come up with it first. The character he created, named Elphaba, is still green, still angry, still powerful…just way more interesting than the one-dimensional Wicked Witch.

5. Elizabeth Swann in Pirates of The Caribbean.
She fights, she lies when she has to, she uses her charms when it gets her what she wants. Although she’s a Governor’s daughter, she’s a pirate at heart, unapologetically. Incidentally, I’ve always felt the Pirates of the Caribbean stories were in fact Elizabeth’s stories—she’s the central character in my mind. She changes the most, she grows the most, she has the most at stake. 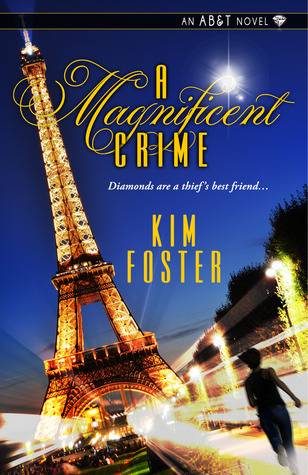 Everyone has a talent. Some are just more legal than others.

Cat Montgomery is a natural-born thief with a special gift for stealth—or at least she thought so. Years

ago, she stole from the diamond-hoarding businessman Albert Faulkner III. Now he wants revenge, and

he forces Cat to plan a heist of the infamous Hope Diamond while it’s on loan to the Louvre in Paris. If

she fails the mission, he'll wreak bloody havoc on her loved ones. But the stakes are raised even higher

when Cat discovers that stealing the Hope is not only an impossible task, it's a cursed one. . . Meanwhile, Cat's boyfriend, FBI agent Jack Barlow, is tracking a fierce criminal known as the Gargoyle, running into Interpol and resistance among his agency. As he follows the trail to Paris, where Cat is, their missions entwine in ways neither of them would have suspected. . .

Kim Foster is the author of the Agency of Burglary & Theft Series, a series of novels about a professional female jewel thief. Kim has a typical background for someone who writes thrillers about thieves and spies and criminals: she has a degree in medicine and is a practising family doctor. (Don’t worry, it doesn’t make much sense to her friends and family, either.)

She’s addicted to yoga, loves to travel, and has a clinical weakness for dark chocolate with sea salt. Online, you can find her blogging about her left-brain, right-brain mash-up on www.kimfoster.com. Kim lives with her husband and their two young sons in Victoria, BC, where she's hard at work on her next book. And drinking a ridiculous amount of coffee.